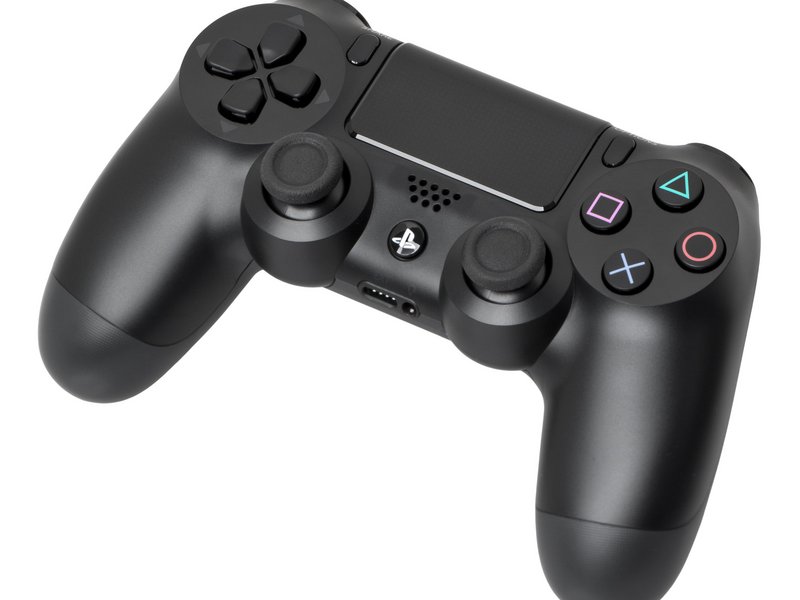 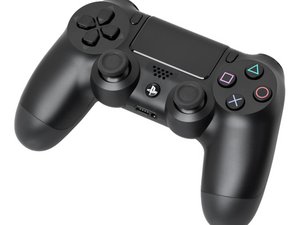 Possible resolutions for common problems for the Sony Dualshock 4 controller.

Why are my buttons sticking? It’s affecting my game.

During game play, my buttons will get stuck down in place, even though I have released the button.

If you've spilled a sugary drink onto the DualShock 4, dried sugar may have gotten into the buttons, causing them to stick. If the buttons are not cleaned, the sugar could corrode the buttons even further. In order to clean out the buttons, remove the affected buttons, and wash them with soap and water. To do this, follow the steps in the button replacement repair guide. If this doesn't work, you may need to order a new button from Sony, or another distributor.

Why won't my controller vibrate?

During impact in Grand Turismo 6, I don’t really 'feel' the impact. My controller is physically inert.

Controller Isn't Synced to the Console

If you've accidentally turned off the vibration function through the console, then the controller will not vibrate. To turn it back on, go to the Functions area by pressing "up" on the d-pad. Go to Settings, then in Settings go to Devices, then go to Controllers. Inside the Controllers menu, there is anEnable Vibration function; make sure that there is a check mark next to it. This setting affects all controllers, and also overrides in-game vibration settings. If this doesn't work, try and reset the controller.

Connection Problems Between the console and the DualShock 4

If you hear a rattling or clicking noise coming from inside of the controller, then the vibration motors may be damaged. You may need to order a new motor from Sony, or another distributor.

Why won’t my controller turn on?

When I hold down the power button, my controller doesn't turn on.

Battery Is Out of Charge

Battery is not Charging

If re-syncing the controller with the system didn't work, you can manually reset the whole controller.

Why isn't the touch pad responding?

I dropped my DualShock 4 controller, and now the touch pad is not responding during game play.

Touch Pad Can Only Be Used With Supported Software

System Is Not Updated To The Newest Software

Why are my analog sticks locked in place and torn up?

Over time, dirt, dust, and other residual materials can get into the crevices between the joysticks. If you can identify the area that is dirty, and you have canned air, give the area a quick blast. This might disrupt the debris enough to knock it out of the controller. If this doesn't work, you may need to clean the joysticks from the inside. To do this, follow the steps in the 'analog stick replacement repair guide.

Joystick Has Been Bent or Broken

If none of the previous suggestions fix the problem, it is likely that your analog stick(s) is bent or broken. In this case, you’ll need to order a new analog stick from Sony, or another distributor, and then follow the analog stick replacement guide.

Why Won’t My Controller Charge?

The light on the front of the controller doesn’t light up when I charge it.

2. Put a toothpick, or a similar object, into the hole, press the button, and hold it down for a few seconds, and release.

3. Once the device has restarted, attempt to charge it again.

If your controller is old, consider replacing its battery. Old batteries are more likely to stop holding charges. Disclaimer: doing this voids Sony’s warranty on the device.

Why isn’t My Controller Syncing to the Console?

My controller is on and working, but it is not connected to the console

Resolving the Issue by Resetting the Controller

The controller might have a general malfunction. This can be resolved by resetting it.

2. Turn the DualShock 4 over and locate the reset button near the L2 button. (It should be a small hole to the left of a screw)

3. Take an unfolded paper clip or a similar object and push it into the reset button hole so that it presses the button itself.

4. Hold the button down for about 10 seconds and then release.

6. Turn on the Playstation 4 console and press the PS button on the controller in order to login to the PS4.

7. If the PS button is unresponsive, try a different USB port on the console.

Resolving the Issue by Resetting the Router

Your Wi-Fi router may be the problem. The router might limit connectivity which can be solved by resetting it.

3. While the router is still unplugged, turn the PS4 back on.

4. Turn the router back on to check if router interference was the problem. Change the router channel to either 1 or 11 if the problem persists (the router manufacturer’s guide has more specific instructions).

Why Won’t My Controller Make Sound?

The controller is not emitting any audio from its speaker system.

1. To turn the controller’s volume up higher, go to the “Home Screen” of your PS4, and press the up arrow button on your controller’s D-pad.

The Controller May Need to be Reset

1. Completely shut off your PS4 console.

2. Unplug your router to turn it off.

3. Turn your PS4 console back on, but leave your router unplugged.

Check to see if the sound on your controller has been restored, by either clicking on a certain function, or playing a certain game, that will cause your controller to emit sound. If your controller’s sound capabilities have been restored after unplugging your router, then the initial issue may have been caused by interference from your router. After plugging your router back in, you may need to change its channel to either 1, or 11, in order to ensure that this issue does not occur again (you may need to consult the router’s manufacturer website in order to know how to do this).

1. Completely shut off your PS4 console.

2. Find the “Reset Button” on the back of your controller, behind the “L2 Button,” and use a paperclip, or some other thin object, to hold the button down for a few seconds, in order to reset your controller.

My command buttons on my DualShock4 do not respond, even after a manual reset. The controller can still turn on the PS4 though. Do I just need to replace the controller entirely, as I do not want to waste time to try and fix it myself.

I learned that if your buttons are sticky, brush them with a slightly wet toothbrush. Let it sit for a couple of seconds then dry them.

A In Depth Guide to fixing DS4 Connection Issues.

1. Put your DS4 in pairing mode by holding PS button and share simultaneously. The light bar should begin to flash white.

2. Connect the DS4 to the device via Bluetooth on any of the following devices. ( PC, Android, PS3 )

3. Disconnect the DS4 from the paired Bluetooth device. Make sure you disconnect directly from the bluetooth device. Once disconnected locate a pin or a small narrow object and push into the reset hole on the rear of the DS4. Hold in place for 10 seconds.

4. Connect the USB cable to the DS4 and proceed to power on the PS4. Once the system has loaded to the login screen it will ask you to press the PlayStation Button. This will iniate pairing between the DS4 and PS4. The DS4 should now be fully operable.

Make sure to follow steps exactly for best results.

Ps sorry for THE bad english

when i open my ps4 the controller starts to flash (like it tries to connect with the ps4) but the it turns orange and does not connect eventually.