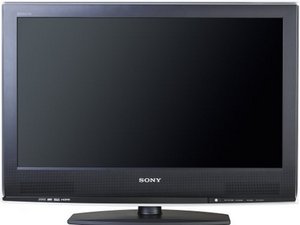 A series of 40 inch LCD HDTVs by Sony.

no picture, has sound, no t-con

There is no picture but the sound works fine at least I can hear the beeps from the menu even though I cannot see it.

The backlight is working fine.

This would normally be put down to a t-con failure however there appears to be no dedicated t-con board. The t-con cable goes directly from the mainboard to the screen.

I have replaced both the mainboard and t-con cable with no joy.

Is there something I am missing? Could this be the power board or something else?

So new power board caused 6 red blinks so I'm guessing that I either got sold a duff board or it's the wrong board despite having the same model number.

Im including a picture of the boards now.

So I figured it out. I feel like an idiot

Hello there i have same problem on KDL42W706B , replaced tcon but still same , all voltages looks fine but there is no any image or osd , Backlight working well , i have sound , i can see backlights lighting led panel well , but nothing appear in screen. i didnt found anything strange at the parts. Did you fix your tv ? [br]

This is most common issue for Sony but there is no any information about solution.[br]

So, what was the solution of the problem? Thanks!

It shows which boards are common failure based on your TV’s symptoms. You said you replaced the main board but did not tell us if your replacement included the tuner board. Sony part number A-1998-231-A. Post some images of the boards you replaced. Use this guide for that Agregar imágenes a una pregunta existente

Thanks for the reply.

I have updated and included a picture of the boards.

If the board attatched to the mainboard is the tuner board then I have not replaced that one yet.

I have sound fine through all sources, backlight is fine. Mainboard and t-con cable are fine. Power board is inconclusive (read update). So really just the tuner board to check as there is no t-con board in this set.

Admittedly I am somewhat an amateur an this is only my 4th fix but I am completley stumped. I'm starting to think the panel may be dead as nothing else appears to be working.

@thelazydj usre the panel is always a possibility but your TV's symptoms would be atypical for that. "If the board attatched to the mainboard is the tuner board " yes it is. That is definitely a board that can cause your TV's issues.

Just read about the 6 blinks and as you can see on the Sony triage this could be a mainboard issue or a panel issue. Double check the board and do not rule out the tuner board yet. It is directly connected to the main board and could cause teh main board to either fail or just not getting signal etc.

The board on the left hand side of the picture is called the LD HM board and may be the problem board here. It is part number: A-2194-269-A. I would try that one.

@abrsvc you are absolutely right. If you read the answer you would have seen that it is a Sony triage. I am sure that in your vast experiences you have come across the Sony triage flow charts. In my comment I erroneosuly referred to it as a Samsung, but at least I know to correct my mistakes!

Thanks for the replies all.

I have a new av board on the way (very cheap thankfully) so I'm hoping that is it. Or it could be strip and sell time for the parts I know work.

The 6 blinks only occured with the new power board once i put the old one back in there were no blinks so it could still be that as I think I got a duff replacement. Will update when the av board arrives

Most likely is the PSU. check visibly for leaking or bulging capacitor tops also if an ESR meter is available check for the series resistance of each capacitor . The PCB may have one or more dry joints…use a magnifier to check the board.

I was thinking psu, I have ordered a new one just waiting for it to arrive. Merely curious incase it could be anything else. Thanks

Check the connections on both ends of the T-con cable. This is a flat ribbon cable that goes to the panel. It is possible that the cable itself is defective. Also, verify that there is no picture on the screen using a flashlight.

How do you know that the back light is working properly?

Update this with the results of the above.

As I stated I have replaced the t-con cable and mainboard with no joy. Flashlight test revealed nothing hence no picture and the backlight just IS working quite plainly. The screen lights up when powered up just no picture.

If not the psu then I'm thinking the panel may be done for, unless there is anything else I'm missing?

Hi! I have the same problem. Everything works ok but I don’t have image. The backlight is working, the sound and the reaction of the TV when I am changing channels but I don’t have any image. I have replaced the LD-HM board but the problem still remains. How did you fixed the problem?

Unfortunately I did not, if you look at my update you can see that in my case a chip on the panel burnt out which I could not replace. 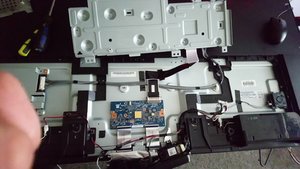