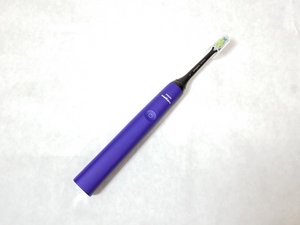 Phillips Sonicare Will Not Turn On After Disassembly, But Blinks

I looked up a video to fix my Phillips Sonicare toothbrush that was rattling. The actuator screw had come out completely which was the original issue. However now after reassembly the toothbrush won’t turn on, but it still blinks when I plug it in as if it’s “charging”. It also vibrates slightly when I try to turn it on or change the mode when it’s on the stand. It’s a model 5100.

I checked the voltage of the battery and it’s reading 3.6 volts, and I used it just before taking it apart, so I don’t think the battery is the issue. I’ve also looked over the toothbrush thoroughly and don’t see any disconnected wires, corrosion, or other obvious issues.

Any ideas why it isn’t powering up? Is it possible that it won’t power on until it’s completely charged up again in the charger? Any help would be appreciated!