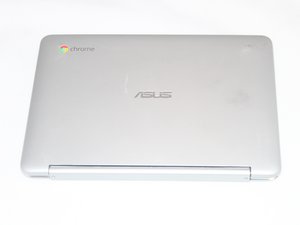 ASUS C100P Touchsceen has Stopped Responding, What Do?

Alright, so long and short: my touch screen has stopped responding—in any area of the screen—overnight. My first instinct was to pop open the screen and see if I can determine which wires/ribbons are loose and tighten them up—one was, but touch sensitivity wasn’t restored after I put it back into place; on a second look it seems to have lead to the camera. I did do a reboot after I replaced the end, just in case, but no dice—but I can’t even seem to determine which part of the screen’s internals even control the touch screen, and anything else that could potentially come loose is taped down (I’ve only removed the case, I haven’t unhooked anything else or flipped up the glass portion of the screen; that’s a little out of my comfort zone), which has lead my troubleshooting efforts directly into a brick wall.

Of course, there’s slightly more to that story: a week or so ago my left hinge snapped. The internal silver wing (inside the screen case) was in two pieces, which had forced the screen case open and spat the left-hand screw at me (I removed the other one to prevent it from breaking further and had a peak inside the screen case; immediately determined it was something I couldn’t fix/jerry rig with what I had on hand, and had to resort to buying a set of replacement hinges off eBay for ~$17). When I replaced the hinges—which was done at home—and reassembled the computer everything seemed to have been working fine, the touch screen responded—though I’d run the battery down because the damned thing would not stay off while I was trying to crack it open, so it’s not the best test I could have done—and I set it aside to charge over night. Well, the next morning the damned touch screen wasn’t working anymore.

So, there’s the full depth of my problem—the only history I haven’t gone into is that I bought it refurbished off Amazon; hence the tape inside the screen, I bet—and I’d appreciate any insight (even if it’s just calling me an idiot for running the battery down instead of finding a better way to go about keeping the computer off.). I’m starting to suspect one of my wires got pinched during reassembly and charging the computer caused a short (I don’t smell a short, but I don’t exactly have the best sense of smell) and I’m going to have to resign myself to finding a mouse (which will hopefully let me do some of the touch-only functions I can’t seem to get to work on the touchpad) until I can replace my Chromebook.

If your touchscreen stopped working and it’s been hard to troubleshoot the exact cause, there is a workaround. A product called “AirBar” (by Neonode) can turn any laptop into a touchscreen device. AirBar is a small plug-and-touch bar that attaches magnetically to the bottom of your machine's display. It emits invisible beams of light that can track your finger movements across the screen and input your gestures into the computer.

AirBars are sold at Walmart and Best Buy, among other retailers.