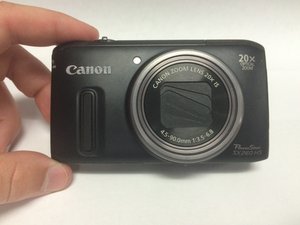 This device page will show users how to replace various parts of the Cannon PowerShot SX260_HS. these things including LCD Screen Replacement, Motherboard, Battery, And Shutter button

Power switch is not working properly

Sounds like a problem with the switch itself. I'm very good at repairing things, but would like some suggestions before I open the camera. There is a replacement part on EBay for the top of the camera, but it doesn't appear to include the actual switch (looks like the switch is activated by a pin that moves down when the power button is pushed).

Any ideas on how to fix this?

Batteries? I use rechargeable batteries. My Sony Cyber-shot (inexpensive early model) did that when the batteries were wearing down. I hate to state the obvious in making sure it is not the batteries, but for myself, I have found that the simplest thing is usually the answer. Good thing too because taking things apart is my last resort.