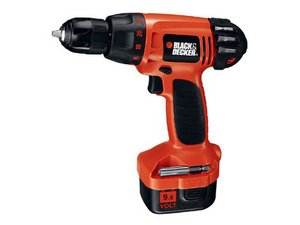 A cordless drill is a power drill that uses rechargeable batteries instead of a corded plug for power. The first versions of the cordless drill used a 7.2 V battery pack. Battery voltage has increased over the years, the most common being 18 V. There are higher voltages however, with some that will produce as much torque as a corded drill.

The most common batteries used are lithium ion and nickel-cadmium, with the market split about 50/50. The main advantage of the nickel cadmium battery is, because they have been around longer, they are less expensive. However, they have a shorter shelf life, they’re self-discharging and there are more environmental issues with disposal. Lithium ion batteries are becoming more common because of longer life, shorter charging time and low weight. For continuous use, one must swap out the battery pack, with a spare charged battery. According to Consumer Reports, “According to the Natural Resources Defense Council, Li-ion batteries have improved so much over the past decade that a newer drill might run 50 percent longer than a drill from seven years ago.”

Cordless drills have also benefited from a motor makeover. Recently, brushless motors (as opposed to the more common brushed variety) became available in moderately priced consumer drill brands such as Kobalt, Porter-Cable, and Ridgid which were typically reserved for professional brands such as DeWalt, Makita, and Milwaukee. This allows them to use less energy.

These drills have similar features to AC mains-power drill, which are the most common. They also have the hammer drill configuration, which has a clutch. Lastly, right angle drills are available.