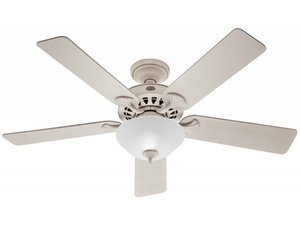 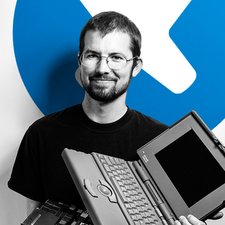 Why is my remote control box frying when installed?

This is a 54" Hunter Contempo Fan with Remote Model #59174, bought new in July of 2017. It was installed by someone else, and apparently worked fine for many months. However, when I moved in the fan and light did not operate via the remote (which as far as I know if the only way to turn it on). After disassembling things, I found the "Fan & Light Control" box and opened it up. This box is Part # K243111000. 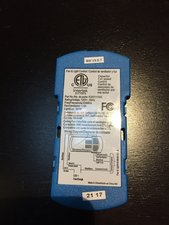 It appeared that one of the resistors was burned out. Thinking I had my problem solved, I ordered another control box here:

I installed the new box, assuming everything would be good. Instead, the new control box immediately started smoking. After hurriedly turning off the power and disconnecting things, I opened up control box #2 and found the exact same resistor had burned out. Any ideas what's going on here? Is there a short somewhere in the fan? Or in the house wiring? I'm pretty sure it was installed correctly as there's only 4 wires to the control box and it's pretty obvious what goes to what.

It might be a little hard to see from the pictures, but it's the resistor just below and to the right of the green QC sticker.

I'd love any guidance from electrical experts as to what could be wrong or what to try next as far as troubleshooting goes. Thanks for your help! 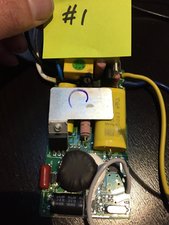 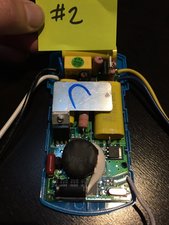 Hey, this is a different question. Would you be able to post photos of that big yellow capacitor in the controller?

The metal is blocking the text so I am unable to figure out it's capacitance. Not sure if you even have this after 2 years.

I am trying to build a DIY WiFi fan controller and I need to figure out the capacitance. Not trying to open up mine.

hi, i have the same one. its a 5uF cap. Are you trying to use a sonoff iFan03 by any chance?

@Matthew Dezzi Yea I was trying to use an iFan03, but I put off the project for a later time.

@sarabveer I am doing the same. However, there are three capacitors in the hunter receiver. 2x 5uF and 1x 1.8uF, so i'm not sure what to use in the ifan. Here's some pictures of mine: https://imgur.com/a/blH05a3

@Matthew Dezzi I never noticed there are 2 5uF caps.

In that case, it seems we would need 2 5uF caps in the iFan03 as well, just as shown in this video https://www.youtube.com/watch?v=XCEPluSv...

Here is a link to the User/Installation manual (found from this webpage).

The wiring (p.11) seems to indicate that the remote controls the amount of current to the fan motor and the lights. A resistor burning out indicates excess current, usually caused by a short circuit (s/c) or a s/c to Earth.

With the fan disconnected from everything, use an Ohmmeter to check the resistance between the white wire from the fan and:

the black wire from the fan. (this is the fan motor - I think)

the blue wire (or black/white stripe) from the fan. (this is the lights - I think)

The motor may read a low resistance as might the lights but not a s/c.

and also between the green/yellow stripe wire from the fan and:

the black wire from the fan

the blue wire (or black /white stripe)from the fan

This will test if there is a connection between either of the two circuits, (motor and light) and earth (which there shouldn't be).

If the fan motor is the problem, as it is less than 12 months old it may be that it is still covered by the Limited Lifetime Motor Warranty. You could try contacting Hunter fans at social@help.hunterfan.com. and ask if this is the case. It never hurts to ask.

As an aside, if you haven't already, it might be advisable to have one (or more) of these RCD (Residual Current Device - Safety Switch) installed in the power outlet and light circuits of the premises, as a safeguard against any future electrical problems. If it was a leakage to earth problem, the RCD would've tripped, isolating the circuit.

To find out how it is wired you'd have to dig deeper into the fan. Personally I'd go the warranty route first , if still applicable.

I don't know how your particular fan motor is wired but I imagined that it would be something similar to the image below. Speed being controlled by the receiver box regulating the current supply to the fan 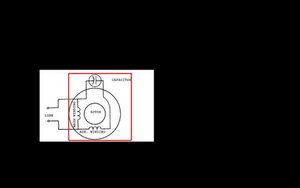 What is not shown in this image is that usually there is a centrifugal switch in the motor that o/c the start winding circuit (Aux winding in this particular image) when the motor gets up to speed.

With the light circuit, I may have misLED (pun intended) you. I overlooked that the fan has LED lights which may account for the high reading. You can't really test LEDs with an Ohmmeter accurately. You could try the diode test in the DMM if there is one (reverse the leads to see if it makes a difference) but again it depends how it is set up. The only good thing about what you tested is that there wasn't a very low resistance reading which could cause excess current to flow.

Thanks @jayeff for the super helpful response!

All of these readings were pretty variable, so I'm not sure if I'm doing something wrong in measuring them, or if something's wrong with the fan.

Here's what I found:

Any suggestions of how to measure these better or what these results indicate?

Update: Hunter's sending me a replacement controller box under warrany. I'm pretty sure this won't do any different than the last one I got off Amazon, but we'll see. I'll report back once it's installed.

Chances are that you'll burn it out as well as the location of the fault hasn't been proven not to be in the motor.

I suppose that there is a chance that the receiver box that you installed was faulty but it is very coincidental that it exhibited the same fault as the original. I don't believe in those kind of coincidences that much.

If you can't get warranty on the motor, then I suggest that you "open" it at least enough to get to the motor windings terminal connections so that you can test the windings (and see what else is there e.g. capacitors perhaps)

Perhaps a good chance to create a "guide" for ifixit. ;-)

The saga continues... It turns out that despite being less than a year old, Hunter has discontinued that model fan. After some back and forth they sent me a brand new fan as a replacement, which I'll try installing soon. That leaves me with the old fan that I could further disassemble for science...

Hey Luke, im having the same problem with my hunter fan. Installed 6 months ago and today DEAD. took down the controller box and it was fried just like yours. Dont need fan right now so just hooked the light aspect up directly to the power wire and will use the light switch. do you have a good contact link for Hunter that you could share?