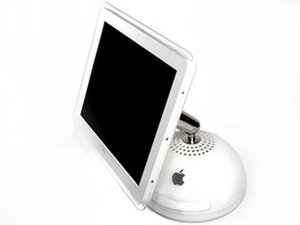 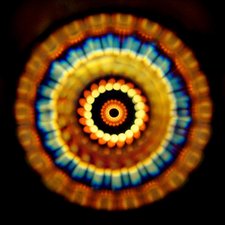 Alright guys, so I'm having some troubles with an old flowerpot iMac. About a month ago I knocked a glass of water on the desk where the computer is sitting. There was no splash to speak of, the water just spilled around the base of the iMac. I immediately pulled the plug, but didn't feel like doing much more, as it was 3AM. Anyway, I left it like that for over a week before plugging it back in and trying to turn it on. Well, it didn't boot. I was kind of surprised because it was a relatively small amount of water and I didn't think it would get inside from under the base.

Now, I'm far from an expert, so I did some Googling and tried resetting the PRAM on the switch on the motherboard to no avail. I also checked the CMOS battery, which seems to still have power in it. Today, I decided to take apart the iMac for the heck of it. I cleaned it to the best of my capabilities and reseated the RAM. Tried turning it on while it was taken apart and noticed that the fan twitches when I plug it into an outlet. Nothing happens when pressing the power button. I don't see any blown capacitors on the motherboard or psu. I tried turning it on without the HDD and optical drive connected, just in case, and again the fan twitched when I plugged it in.

Any help is appreciated!

Edit: Here's the base and both sides of the motherboard. I don't see anything around the vent holes, save for a bit of dust.

Edit 2: Alright, so the photos got scaled down while uploading. Here's a Google Photos album with the full-size images: https://photos.app.goo.gl/TiF1wUOPPoC3OI... 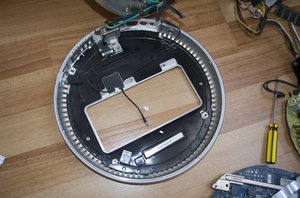 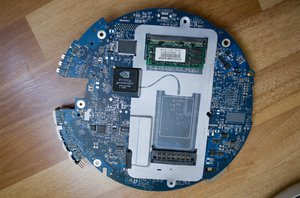 I think you need to go on an inspection mission! Follow this IFIXIT guide: Removing Bottom of iMac G4 15" 700 MHz EMC 1873 and look at the edge where the water likely splashed in through the bottom vent holes. Take some good detailed images of the area. If you don't see anything visible on the top side we'll likely y need to put the logic board out to see the bottom side.

OK, I don't see anything either, which is good!

I'm wondering if your PRAM battery just needs replacement. Get a fresh battery and put your system back together did that fix it?

Hey, thanks for the reply! I don't seem to be able to add images to my comment. I will edit my original post. I've got the bottom part fully disassembled, so the board is out.

Yes, figured that out, thanks. I uploaded some photos in my original post. I don't see any blown capacitors or spills on the MB.

Hi Dan, I got a hold of a new battery, which turned out to be more difficult than I had anticipated. Anyway, I changed it, but it does the same thing – a fan twitch and nothing else. I still haven't screwed the motherboard in place, just put everything together and closed the base to try it out, but I doubt this would change anything. I'm really at a loss here.

It looks like something within the power supply that needs to be looked at.

At this point you'll need to do a deep dive into the power circuitry. You'll need a DVM and access to the systems schematics (and the ability to read them) and you'll need to find the needed replacement parts.

Are you up to this?

Oh man, I have a voltmeter, but I'm not sure I'd be up for the task. Do you think a technician (not necessarily one that deals with Apple computers) would be able to take a look at the PSU/MB and determine the cause of the problem? I read somewhere online that the C216, C215 and C212 capacitors could be the culprit. I could change those, that wouldn't be a problem. I even tried heating the motherboard a bit with "hair dryer" trick lol. Still no luck.