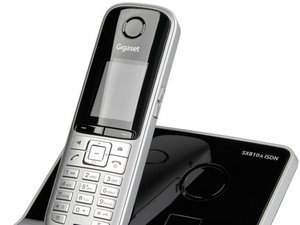 Why does my phone 810/A cut out after around 10 minutes talking?

Have you checked that the batteries are as specified, NiMH 1.2V 550-1000mAH and are the same for all four phones?

Have you swapped the phones between bases and cradles to see if it is a power adapter problem?

If they do not charge beyond 34-66% in the second phone (and the other batteries fully charge in the first phone), then either one or both of the batteries are faulty.

Do the same for the other phone that is having the same charging problem.

Note: If it is a phone battery charging / charge display information problem, I'm wondering if the two phones that are having the battery charging problem have the same firmware version installed as the two phones that do not have the problem? I cannot find where this information is stored in the phone, as the User Guide only describes how to update the firmware. If you cannot find it either maybe you could connect one to a PC, as described in the Guide and see if there is an update available for it. Try it also for one of the phones that charges properly. If they are different maybe a firmware update will solve the problem. Unless of course the problem phones have a later update as compared to the working phones. Then you should contact the manufacturer's support section for advice.

If the tests point to the problem being in the phone and the firmware is the same for all phones then it most probably is a battery charging circuit problem in the phone. I suggest that you check the warranty period and if still valid contact the manufacturer's customer support section regarding a warranty repair or replacement. (Even if out of warranty, if all four phones are the same model, firmware version and age I would contact them anyway and ask what could be wrong).

The batteries have been changed and it is always the same behaviour. The phones get charged over night (at least it seems so); the batteries show a 'full' sign. If I use the phone it takes a couple of minutes and it switches off (sometimes immediatly). Putting it back in the craddle it starts charging für 24 hours or so; then the same thing again.

I put the batteries on an external charger and fully charge and it does the same.

I swap the craddles and it is the same.

I swapped at least 5 different kind of batteries and always the same.

I use normal 1,5V Batteries and all seems working fine then. In my opinion, the phone does not operate well with 1,3V akkus.

I discard them now and buy another brand.

It doesn't help to try to unload the phone by simple move from charger. In this case a previous wrong calculated capacity will cause an early shut down only. It seems to be a temporary remove helps to reset the phone.