How long should a new battery be charged before using?

I just got a new battery from ifixit and i wanted to know how long should i charge the new battery the first time.

Charge till 100% full, however long it takes. Let it trickle after that for say 30 minutes (means leave it connected to charger after it reaches 100%).

From there use it in one go without charging until almost 0%.

Then charge it in one go without interruption till 100% full. You can let it trickle a little bit.

The above is called calibration.

If you decide to leave your phone turned off and unused for a long period of time, do it when the battery is at 50% capacity.

Always use a genuine wall charger, and a genuine or certified cable.

Heat will damage your battery.

Extreme cold will diminish its capacity temporarily, until the temperature rises again.

How to calibrate your battery

For phones and tablets:

2:Use your device until it shuts off due to low battery.

When you receive the kit you get a card it says battery calibration with the I'll fix it logo on it it says (For Optimal Performance, calibrate your newly installed battery. Drain battery below 10% then charge uninterrupted to 100%.) And that is all 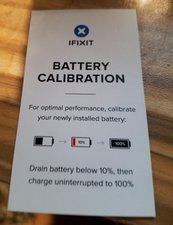 So it's a little conflicting I'm going with the one from the wiki.

The funny thing for me is it's been at 1% for 5 hours this is a Samsung S7 Edge does anybody know if this is normal? However, it did say the battery was too low to use flash when I took that picture maybe it's getting closer to shutting off.

I just want to say iFixit is really cool I couldn't believe what I paid for my kit $32 came with everything to replace the battery. The instructions were straightforward and clear to understand to tear it apart however, they should have an up-to-date adhesive strip tutorial because that got a little confusing for me even with doing some Googling but I did manage to figure it out. Perhaps on your tutorials iFixit after congratulations you've installed your battery now let's put the phone back together in this second tutorial just a thought. :-)

How if I doesn’t wait till 0% I already charge, is will damage the battery?

“There’s a reason Apple no longer recommends calibrating the battery in your iPhone, iPad, or iPod. It’s bad for battery health. They’re even introducing a new feature to keep your battery from charging to 100% when you don’t need it to.”