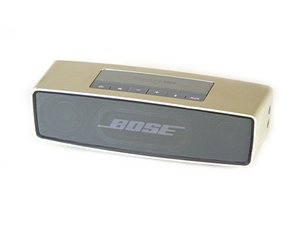 First generation Bose SoundLink Mini released on July 1, 2013. The device weighs 1.5 pounds and has a Bluetooth range of 30 feet.

Replaced my battery, however, all LED lights are now illuminated

After installing a new battery ordered from ifixit, all of the LED lights come on. When I plug in the power adapter, the battery does not appear to be charging and ll light remain illuminated until I remove the battery.

Try resetting the speaker with the mute button and see if it fixes the issue:

If you are still getting the same LEDs illuminated, and can't get the system to power on properly after this reset, it could be a miscommunication between the LEDs and the battery.

I attempted a rest as you describe with the power charger cable attached to the speaker. After holding the Mute button for 10 seconds, the lights flash, the speaker makes an audible noise that the power cable is attached and the the power LED flashes red rapidly.

Any other thoughts or advice based on this diagnostic test?

@codyandresen If the light blinks red in about 90 seconds after battery insertion, then it could be the battery voltage too low.

I have replaced the battery with a new one ordered from iFixit, so this is likely not the case. My original battery was behaving this way, so I ordered the new battery to remedy the problem...

@codyandresen - I have the exact same issue too

All the LEDs are just on. I've done the reset. Yet all that happens when connected is that it goes to the rapid red blinking. When I lift it off the dock or disconnect it - all the LEDs light up again.

I bought some faulty soundlink mini 1s and established all lights on with a charged battery indicates a faulty main PCB.

Investigating my board there doesnt seem to be any obvious shorts or damage so anyone capable of fixing this would have to be capable of doing board level repair.

So it's just a really expensive paperweight if you get the all lights on issue? I replaced my battery when the power light was blinking red and now the new one just has all the lights stay on.

Are you telling me it's a goner?

same. wish there was something else I could try.

I'm having the same exact problem. I thought it was the replacement battery and replaced it with another new one! Didn't help. Looks like I'll have to go back to listening to the Anker speaker I picked up. Unfortunately, the sound quality

I have the same problem also on my SoundLink mini 1. It was working fine until I didn't use it for about a year and the battery went flat. I tried to charge the speaker to no avail tried the reset only to get the 3 white lights. I have contacted Bose UK and they offer to send you a working mini 2 for £110 as there is no software update on the SoundLink mini 1 only on the mini 2. So I found out by searching the internet they have not made the speaker since 2018, and apparently there is an over stock of the mini 2. Which has also the same problem as the mini 1 if the battery go's flat you lose the software that runs the speaker, only the the mini 2 there is an update. So if you have a mini 1 Bose will not admit to a design fault on this speaker and will only do a swap for a mini 2 (reconditioned) for £110

I actually ran into the same problem. I recently replaced all the night lights in the house, as the old ones were very yellow. I wanted a soft and pleasant color in a place where I don't have chandeliers. For a long time, I've been thinking about ordering some night lights on Amazon. As a result, they came to me very quickly and I was delighted. Almost all children like to fall asleep under the mysterious and soft light from the night light. Yes, what can I hide, even adults like the cozy atmosphere that it creates.Indeed, every penny spent on this purchase is worth it. In automatic mode, it turns on even in the daytime in a low-light room.

this is spam...this comment should be removed and user deactivated

Press the sound mute button for 10 seconds *while the sound mini link is NOT plugged in*.