So after an incident where the fan connector came loose. The cowling melted (slightly). After reconnecting the fan, everything seems fine. This mini is a server model and is dual-booting OS-X Server and normal High Sierra. On Snow Leopard server, it runs fine and not too hot. But, on High Sierra, it goes up to 90C and the fans go full speed. I made an AHT USB drive and all test pass just fine.

Is it an SMC issue? Do i need to replace the cowling, thermal paste or board? Or should I try reinstalling High Sierra?

I wrote a little batch script that checks the temps every second and outputs it to terminal. On the OSX Server, everything’s chill as usual. But, on High Sierra, the mac boots, temps are around 57 degrees (ok looks fine), then they ramp up 0.1-0.2 degrees every second until it hits around 76. Stays there for a minute, fans roar. Temps go down, fans ok. But there’s not a single process using much CPU and the activity monitor pins the CPU at 90%. I will try resetting the SMC, NVRAM etc. and if that does not work, try reinstalling the High Sierra install. But will have to back everything up first.

Again, i don’t think a melted cowling should cause these kind of issues. But I could be very wrong.

I had an emergency and wasn’t near my system. I took a screenshot about every minute. The die does seem to get HOT. Maybe thermal paste? But it also only happens starting 30s after it logs in, and then a few mins later it seems like nothing happened… Will definitely reinstall macOS High Sierra because that just isn’t right. 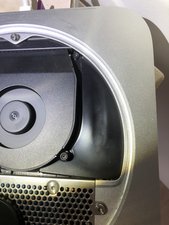 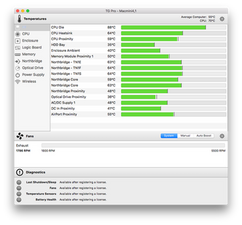 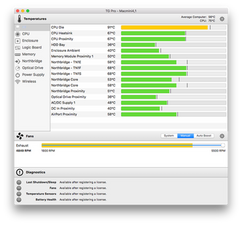 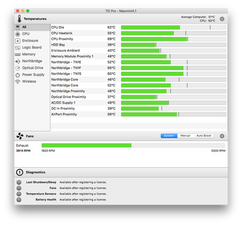 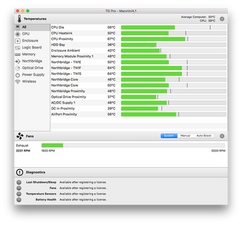 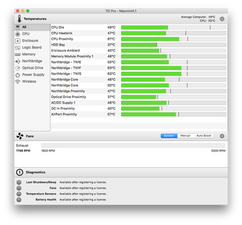 What is your drive setup? One or two HDD's or SSD's

I had heat issues with my 2011 Mac mini when I had two HDD's, I ended up going with two SSD's. But I don't think my problem is like yours. As the problem was when I was running the system hard as my backup server.

I think we need to look deeper here. Lets install this great app TC Pro similar to your batch script it offers a logging function that is able to capture all of the thermal sensors in a neat spreadsheet with the full version if you want that. I don't think that needed here.

Lets just take a snapshot of the apps main window so we can see all of the sensors and fan's, make sure you get all of the sensors! Resizing the window will likely be needed. Post it here for us to see Agregar imágenes a una pregunta existente

At this point I think you need to repaste your heat sink, you might want to replace it as well as it may have popped a leak to the coolant leaked out so its not transferring the heat effectively MacMini Server Heat Sink and Screws (2010)

Follow this guide to get the board out Mac mini Mid 2010 Logic Board Replacement and getting the heat sink off.

I will at least repaste this weekend. I think with the fan having been disconnected, the paste lost it's thermal conductivity. If it still runs too hot, i'll replace the heatsink as well.

I will keep updated! Thank you for the info!

@maximc - After you've pulled the logic board do a detailed inspection along the heat sink for staining. That would be the coolant leaking out.

Hi @danj, I just repasted both chips and temps are about 10 degrees C better. There does still remain an increase of CPU temp after booting in High Sierra (Not in Leopard). So i will still reinstall that. Other than that, i did not find any sort of staining around the heatpipes, fins or any other part of the heatsink. So i think that's safe. Temps are around 45 degrees under small loads which is great because ambients are 28 due to the weather.

The old paste has gone bone dry so i think a combination of all these factors was not great.

Thank you very much for your tips, tools and input! Have a wonderful day!