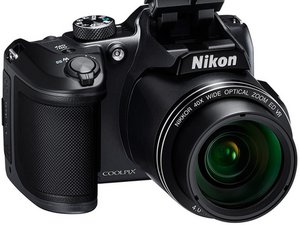 The Nikon COOLPIX B500 is a mid-tier superzoom point and shoot camera. It is sold in black, purple, and red.

The last three days while I am recording videos the camera suddenly stops recording, a notice comes across my screen to wait while video is processing. It will sit there and sit there with that message until I turn the camera off by releasing the batteries. It will only record 7-15 seconds at a time. I had no problem recording a week ago. The camera was 4 years old this past February. I have a 32 gig SD card in it (same card I have been using since I bought the camera, and am using Lithium batteries (camera settings are set for lithium batteries). Thank you for your help.

Some of these cameras only record for a short amount of time to get around the 2007 EU video camera tax. If everything checks out, it's usually because of that since it's an extremely common limitation, even on late model ones. Some stretch it out to 29 minutes to be 1 minute under the 30 minute cap so it isn't as annoying. The problem is the manufacturers don’t remove it on models bound for countries without this tax out of fear or laziness. It's usually a 15-30 second cap on older models with hardware limitations, but it can also be even shorter on some that can't handle video over long periods of time well. This article goes into it properly. This article also goes into it as well. It's a tax avoidance limitation that's software imposed on 99% of DSLRs and late model point and shoots.

As of 2018/19, it’s dead :-). The problem is old cameras are still affected (until the EU kills the code) nor will all cameras get patched especially older models :-(. Check the manual for anything related to a video recording cap - maybe Nikon isn’t reckless and disables this stupidity on non EU SKUs.

If that isn’t it, try a higher speed memory card like a Class 10. The other reason this commonly happens other then tax avoidance is because people use junky Class 4 cards and expect them to handle HD video recording when it never works. You really need to get a Class 10 SDXC for video - regardless of what the manufacturer says. If the camera is too old for SDXC cards, get a HC Class 10. It looks like SDXC will work in this since there are approved SDXC cards on the Nikon memory card list.

Thank you Nick. It turned out my issue was simply my SD card was shot. I bought another and all has been fine since.

@patwick I didn't think it was due to the EU tax issues because they don't go low anymore (back when there were heat issues yes, but now with proper cooling and high capacity batteries it's not an issue to push it to 29-30 minutes). It was more of a double check for this possibility thing.

None of the manufactuers get this right - even if they say you can use a lesser card, it never works below Class 10. The cheapness of the flash in those subpar cards doesn't help. Don't go below Class 10 if you can afford it.

Thank you prop man. I just reset to the factory settings. The batteries are brand new. My card doesn’t seem to have anything left on it. I tried it tonight with still photos. They didn’t do too well. Took a long time for them to take. I tried a different card. I didn’t work too hard with the second card. I resorted to using my phone. I will buy another card and see how it goes on Wednesday at my grandson’s soccer game. We will see if resetting the factory settings and new card will help.