How to remove anti-glare coating effectively?

This is my progress on removing the anti-glare coating after 2 hours. I tried Listerine, 90% alcohol, Peek Metal Polish, anti-bacterial wipes, bleach, and nail polish remover w/ acetone (before I read that someone else damaged the glass itself because of acetone). Luckily, my glass is still fine. Unfortunately, I haven't made much progress as you can see from the picture. I'm confused to why none of the solutions isn't working for me. Some said that Listerine alone worked well along with a microfiber cloth. I tried that but since it didn't work I moved on to try all the other solutions I mentioned. Is anyone else having this issue dispite of trying all kinds of solutions? And is there any other alternatives that would make it simple to remove w/o much time being spent?

I tried them all as well, but purchased a small bottle of 3M 60150 Glass polish from a auto paint store and used a scouring pad and it took some time but it came off way faster.

I used quixx plastic polish, tried listerine, alcohol, everything, then I was stuck with the middle of the screen that did not want to go off, quixx did it in 30 minutes, it looks like brand new. I do not miss the antiglare coating....

@M. Sosa Thanks for the comment. Which quixx product did you use exactly? I did a search on amazon and there are few quixx products. Was it Quixx 00070-US Paint Scratch Remover Kit or something else?

Do aplly some pressure but not too much. At the beginning it seams as it would not work and then it starts to go off. It is great now..

Do not use sandpaper!!

Thank you for your advise. I have tried that and it does not work.

I completely removed mine using a “Mr Clean Magic Sponge.” My screen is now gorgeous and 100% not scratched, however, of course, it is very reflective.

I didn't try the Mr. Clean Magic Sponge, as the Clorox wipes were enough to remove the coating. Had they not worked, your suggestion would have been next in line. Congrats, Kathleen.

Instead of using cerium oxide which is used to actually polish prescription "glass" lenses in laboratory production setting I tested out the Mr Clean Sponges and they did a pretty good job. Much faster then Listerine and Clorox wipes, but this is probably due to the sponge media combined with the embedded cleaner. The reason some versions of the cleaning processes noted throughout this page varies results wise has to due with how much of the anti-glare coating stack has actually been warn away. The actual design and or application of the antiglare stack by Apple is the ultimate source of the defect. Nice that they kind of admitted that with their 4-year program, but I don't remember Apple notifying me that my screen was part of the potential problem and that my clock was ticking. When I found out they had a program it was 4yrs and 5 months since I bought my MacBook pro so no coverage but they would be happy to replace it for $680.

I'm doing this now and finding after 15 mins of wiping/scrubbing it's only ~80% off. How long did it take you guys?

I took mine to the Apple Store, only to learn the extended warranty was over.

I stopped for Clorox Disinfecting Wipes on the way home and this was after about two minutes of wiping. Before and after: 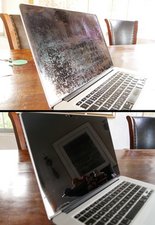 Ridiculously easy. And no, I don’t notice any screen glare now that the coating’s gone.

Congrats to all those others buying automotive compounds and what not, but in my opinion the Clorox wipes really do the trick. I'm super picky about scratches and blotches etc., and this method definitely left my screen pristine. It did take me about five minutes (twice as long as noted above), but still got 'er done. I did not risk using the Mr. Clean eraser sponges, as they are mildly abrasive and could leave tiny marks. The Clorox wipe cloths left no marks at all.

Mine cleaned up just the light spots and left some hard to remove spots any help?

The disinfection wipes worked like a charm. Thank you! Apple should add that procedure to their manuals ;) and pay Clorox a share of its profit.

I probably should have gotten Clorox Wipes when I was the store earlier today. I got Kathleen's suggestion of Mr. Clean Magic Sponge and it required a lot of wiping and scrubbing and still wasn't off after 10-15 minutes. I'm taking a break right now lol... It's like 80% off though. But yo my elbow hurts from scrubbing!

Have a look at this thread, lots of different experiences and products used, hope you can find the one suitable for your needs. Some report quick and easy results with commonly available wipes and cleaners.

@arbaman - The fluorite overcoating is what has failed which then exposes the lower softer coatings. Getting the remaining fluorite off is the tricky part! 3M Novec screen coating which I understand is what Apple uses. I couldn't get the needed solvent in anything smaller than 20 gallons! ($$$)

What was the solvent needed to remove it?

I tried them all as well, but purchased a small bottle of 3M 60150 Glass polish from a auto paint store and used a scouring pad and it took some time, but it came 100 times faster. Just keep rubbing till the polish is gone and the anti glare.

I have just done mine. I tried everything in the house but nothing worked well (including several makes of antiseptic wipes) Those products with alcohol in then worked a bit better than the others but were still too slow. I tried combinations…metal polish + hand sanitiser, for example without much success. Then I went out looking for alternatives. I bought a few, but the first one I tried ‘Wet Wipes’ from Boots Chemist worked well enough. I would not say it took just two minutes, but 10 minutes rubbing and three wipes later my screen is clean and glossy.

It seems that there are different formulations of the coating for each model so you may have to try one or two before finding one which works. Mine is Late 2013 MacBook Pro 13.

Boots Wet Wipes worked brilliantly, no scratching or rubbing, the coating just comes away leaving you screen clean and shiny. It's better with the coating on but if it is damaged then this is a great option.

I tried microfibre and window cleaner first and then listerine and gave up - after several hours of work I had managed to improve the top right corner of the screen but probably made the middle of the screen slightly worse.

So 1 year later and the screen is looking worse that ever so I decide to test steel wool in top left corner. It worked a treat - a few mins of gentle rubbing and the troublesome coating is gone and no scratches from the steel wool.

Wow! Surprising the steel wool left no scratches. But it sounds like what's working for everyone here is various forms of scratching/abrading the coating off rather than dissolving.

How about getting it fixed under the extended warranty program I think its still running for this series StainGate.Org. Its getting close to the end so check your purchase date and don’t waste time!

I checked my serial on the Apple site to see if I was eligable and I was not.

I've tried using many different chemicals and abrasives I could not find a workable solution without making more of a mess!

Part of the problem is the cover glass is vapor coated with metals to reduce the glare and then a over coating of fluorite is then placed on top. What you encounter is the wearing of the fluorite coating which then exposes the softer metals. These lower coats can be removed with chemicals the over coating is very tough!

I've given up trying to save these displays. I've managed to get most of my customers replacement displays under Apples extended warranty. The few I wound't I managed to get used displays for them. It's been a good six months since I've needed to replace one.

Sadly, you're late to the party ;-{ At some point you'll need to call out uncle and just buy a replacement display. Sorry!

@danj That explains why I was having a hard time. I wanted to get rid of the coating in the first place because it had marks from the frame and keyboard. Many others probably had it easy because they already had spots w/o any coating.

It took me less than 30 min… : a heavy duty automotive rubbing compound no.7 did it all for me. Got a beautiful shiny and clear Macbook pro again!!!!

It took me less than 30 min… : a heavy duty automotive rubbing compound no.7 did it all for me. Got a beautiful shiny and clear Macbook pro again!!!! 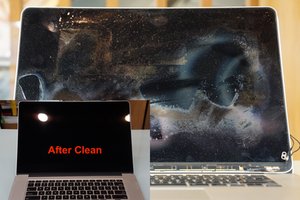 you can see on this video very easy to fix

I used an old bottle of Windolene and couple paper kitchen towels. Sprayed folded towel and rubber all over the screen to wet it. Keep rubbing as it dries, repeat until all gone. All took about 5 mins.

What is windolene? is it ammonia based like windex?

I tried everything from Listerine to car polisher for weeks and nothing really worked well. At the end I made it using two products:

It is now 90% better than the staingate but you must know that it takes a LOT of effort.

By the way, mine was a Macbook Pro mid 2015, second screen after Apple change it for staingate.

I recently picked up a used 13” Macbook Pro 2012, and the antiglare coating was missing in places. I read through this thread and watched a YouTube vid of a British guy who used Listerine and a microfiber cloth. In the comments on the video (maybe somewhere in this thread too), I saw someone who successfully used generic Lysol-like disinfectant wipes. I had some of those around the house and decided to give it a try today. It worked perfectly and only took me about 10 minutes!!

Here’s what I did:

I used two disinfectant wipes (Walmart brand) and two paper towels. The antiglare coating was probably 80% intact. I started with the first wipe (well saturated with liquid from the wipe container) and wiped with light pressure horizontally left to right, and back and forth, and down to the bottom of the screen. I then did the same vertically, up and down, and left to right across the screen. I repeated this horizontal/vertical wiping 15-20 times. Then I wiped it dry with a paper towel. The paper towel also allowed me to assess how much of the coating remained on the screen. When the first wipe dried out I, got a fresh, well-saturated wipe and continued until all of the coating was gone. I also ran the wipe around the edges of the screen, using my fingernail to push the wipe into the corners and edges. The whole process took me about 10 minutes.

The only very, very minor downside is that removing the coating revealed several actual scratches to the screen itself —but it was more than worth the time and effort, as my screen is now clean and clear again.

I may look at replacing the antiglare coating, but only if I can find something inexpensive and easy. 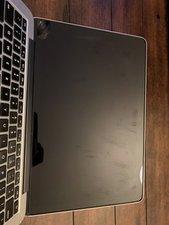 I used the turtle wax headlight restoration kit and it took 98% of it off in less than 10mns. It’s a slow process since the screen is so delicate but it does comes off quick. 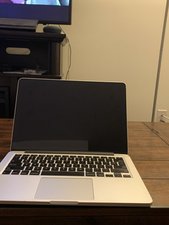