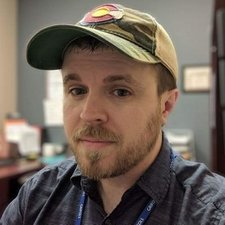 LED backlight has a dark pattern on bottom edge of the screen?

My LED backlight has a weird pattern on the bottom. It seems that every other LED is dim (but not completely off).

Here are a few pictures:

I've noticed that restarting the computer fixes it temporarily (not always though). I've also noticed the backlight flickering a little bit, and then having the dark spots either go away or come back.

Has anyone else had this problem and found a solution that fixes it? I've found other posts online about this issue, but no one seems to post the solution.

I replaced the LED driver board with a new one I purchased from eBay. That did not fix the problem.

There are a few things that I didn't mention in my original question:

Here is a better picture with a solid white background:

I finally fixed it. It was the LCD screen. I bought a new LCD screen from eBay, and now my backlight is perfect. I have a glossy LCD screen instead of a matte. I like it. The contrast is much better with a glossy screen. It seems to be sharper as well.

I finally fixed it. It was the LCD screen. I bought a new LCD screen from eBay, and now my backlight is perfect. I now have a glossy LCD screen instead of a matte screen. I like it. The contrast is much better with a glossy screen. It seems to be sharper as well.

Your machine may have an Nvidia GPU issue. The A1226 has this processor. Please give the last three figures of your serial number to exactly identify your machine. Also please hook it up to an external monitor to eliminate this possibility.

I have the A1260. The last three characters of my serial number are: YJX. External monitors work perfectly. I'm using a 24" Samsung T240HD monitor connected to my DVI port on my MacBook Pro right now and it looks great. One thing I didn't mention in my original question is that the backlight on my MacBook Pro is 100% perfect for the first 2 or 3 seconds after turning it on (or resuming from standby). After a few seconds, every other backlight LED is slightly dim (but not completely off). I'm starting to think that the problem is either the LCD screen or the left I/O board (the small board with the magsafe connector). The power cable for the LED backlight plugs into the left I/O board.

This same problem happened on my Early 2008 MBP, intermittently. Found this post on Apple support that shows how to reset the display to rid the symptom. Seems the fix is only temporary, but can be repeated as often as needed.

An in-depth post on Apple's Macbook Pro Community Forum under the heading "Strange vertical stripes" suggest it's a known problem which doesn't get resolved with replacing parts.

I found that a few months ago. It did not fix my problem. I had a hardware problem. Every time I turned on the computer or resumed from standby, the LCD backlight would be 100% brightness, but after about 5 seconds, every other LED would be slightly dim. I finally fixed it today. I bought a new LCD screen from eBay, and now my backlight is perfect at 100% brightness.

I remember taking my Early 2008 MacBook Pro to the Apple Store. They replaced some hardware part free (but didn't explain what). That fixed the problem for a while but it came back. I've since used the 2008 Mac like a desktop after I eventually bought a 2004 13-inch Retina Display Macbook Pro because the system felt slow. Since then, I've only seens the stripes only once or twice regardless even how warm laptop chassis got. Looks like Apple fix their design on the newer laptops since I've never seen that problem in my 2008 MBP.

OMG! This has been plaguing me for weeks! I had my early 2008 trackpad go out and had to have the case replaced to fix it, and since it was returned (done by a Mac repair shop, not Apple) the bottom screen has done this though it never had before. Today it was too visible to ignore and not be depressed. The shop has insisted it was not due to anything they did but could offer no help other than to replace the screen. Restarts and even repairing permissions and clearing caches and resetting power management have not helped. The link to the Shift - Control - Eject was a godsend! It's back to normal!!!

Depending on what operating system you are running, there is a patch put out by Apple to resolve this if it continues to reoccur.

My name is German.

I followed the instructions at Youtube "how to replace a MackBook Unibody display".

Then I reassemble the machine and "voila".

May be a problem whit a conector or something like this.

Try to disasemble and reasemble the data cable of the display before replacing it.

Dont forget to disconect the batt.

I can't give you a definite answer, but it seems to me that there'd be no reason for the display data cable to individually control the separate LED strips. I would think it must set the level for the whole backlight, which the driver board controls. Given that the whole strip drops out, the LED driver board seems the more likely culprit of those two.

Does anything different or unusual happen if you change the display brightness when this happens?

When I change the display brightness, the dark pattern from the LED backlight is still there.

I've noticed that while using the computer (without even moving it), the LED backlight patten will show up or disappear randomly.

I'm thinking it's probably the LED driver board that's the problem, but it would be nice to find someone else who has already fixed the problem before spending $60 for the part.

Amazing! For the first time since I bought my MB Pro in 2008, I woke my machine from sleep this morning and encountered this problem. The only thing I did different yesterday, was that I installed Marine Aquarium 3 and activated its screensaver. I wonder if that software could have aggravated the problem into showing itself.

So, my first troubleshooting task was to switch to and old screensaver that I never had problems with. Did not help in any way.

SOme hours later, I tried to install an update to Adobe Flash Player, but the installer was still running 30 minutes later and I could not get any response from the machine. In frustration, I forced a hard shutdown by holding the power button down until the machine shutdown.

Imagine my surprise when I turned the machine back on and the problem was gone! Go figure.

I have the same problem and I'm running Mountain Lion, so I don't think that will help.

Im having the same problem too, mine is samsung led monitor 27 inch, 12 month used, warranty is 3 year so it's still on.. Should I sent it for repair?