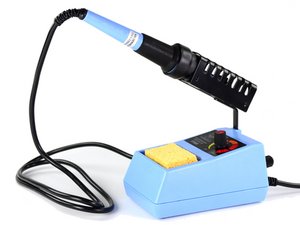 Can I convert a USB Microphone to Aux(Analog Audio)

So i have a really good quality USB Microphone which my friend gave to me beacuse the DAC on it somehow broke and it produces a wierd noise every minuite or so. I am sure that its the dac becase it the sound quality otherwise is very good.

so what i really want to do is remove the Broken Dac and wire the actual microphone to a 6.3 or 3.5 mm aux audio jack

On a Samson C01U USB mic, I add a 1/4” mono TS jack. I soldered the two wires, one for tip, the other for sleeve ground on the board closest to diaphragm( head of mic). The larger board is the Analog to Digital converter. It was a while ago, but I know I made sure connection was made to send wire (yellow I remember) and not to voltage coming up from larger board. The TS jack and cord is about five feet. I usually plug into my guitar pickup so can sing into mic with guitar and into PC for recording. But, I also plug the 1/4” jack into my mixer, but still must keep usb plugged into computer for power, then the analog signal from mic diverts to TR jack to mixer allowing use as analog condenser mic. This is what you are aiming for. A 5v cell phone charger cannot be used to supply power to mic. Chargers only bring the 5v to pin one, while PC USB port must send power on other pins to activate the mic. 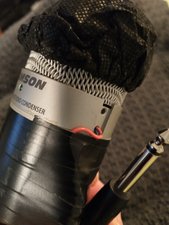 I think this is exactly what the original question was looking for - get the signal from the horses's mouth (or the mic's signal leads) but keep the USB to supply the bespoke phantom power to keep the mic happy. You might still need a multimeter to find out which wire is which, if there are more than one going into the mic... e.g two wires could be the +5V DC from the USB to supply power to the mic and the other two would then be the signal. Take those signal leads to a 3.5mm jack socket that you bought online and see what happens.

As a person myself Interested in Electronics & in Recording, and a DIYer, plus Conservative, I've been looking into the same Question about Converting USB to TRS Cable to go into a Mixer or Interface that would SEND the Signal. Now from I understand The Reason that for instance a 3.55mm Jack has a TRRS (as opposed to TRS 2 Ring Stereo Cable) is because The Third Ring has to do with Sending Audio From a Microphone such a 3 Pin XLR Cable does. BUT Still, I Can use a Dynamic Or Condensor MIC of course with Male XLR connectors on it, Thru The XLR Cable, BUT Still, IF I dont have an Interface Or Mixer with an XLR INPUT, Thrn I have before Purchased a separate Female XLR To 1/4” Jack Adapter & Connected That to the other END of The XLR Cable, then Plugged the !/4” Jack Into The 1/4” INPUT On My Unit & YES, It WORKS, Nevertheless Without having to be TRRS like The Femsle USB to 3.5mm TRRS. AND Food For Thought, I Have 3.5mm Jack Headphone Receivers that I Plug into a Female 1/4” Adapter then into my Interface or Headphones Amp. SO Now with that Said, It seems to me that a 3 Pin XLR Balanced Cable AND The 3 55mm TRRS or even a 3.5mm TRS , All Three Can do the same thing it stands to Reason, HOWEVER The Only Way that I'm going to Find Out for Sure, is Science requires Discovery by TESTING It ones own self. The USB Female to 3.55mm Adapters are being described by the sellers as HEADPHONE OUT….and NOT Also MICROPHONE IN, & even for Onky CAR Radios that have the capability. But hey, these Adapters Only Cost $8 or so, AND So what have I got to Lose by buying & trying? Nothing but $8 and Yet If I Have Success, I Can Tell The World that It Works And If it Dont work, then I will have learned something & I can Still The World, and Success Favors the Bold, So take The Chance & do what You will with that MIC ,it already Ain't working correctly and You said it was FREE to You, so now's the time to Experiment. YES like the Man said, USB Mics require Drivers to operate BUT a 1/4” Guitar Cable to USB to The Computer does Not necessarily So Why would it be necessary the other way around from USB To 1/4” Into a Mixer? USE The PHANTOM POWER On The Interface Or Mixer (Because I have a BLUE Snowball Desktop Studio CONDENSOR Mi ( And ALL Condensor Mics Require 48v Phantom Power BUT, Qusstion, Since Its a USB Mic Plugged into the USB Port of The Laptop, DOES The LAPTOP Carry 48v Phantom Power??? Answer is NO SIR!, So then just WHAT Do Yiu Think The “DRIVERS" are about therefore? I Think Its to Give it the UMPH it Requires the same difference as 48v Phantom Power. So I'm gonna Buy that USB Female to 3.55mm Adapter BECAUSE I learned from My iRig2 AND My RODE Shotgun Smart Phone MIC that With The TRRS It Allows For BOTH Headphone Out AND MIC IN From What??? Answer Is from The HEADPHONE OUT… There is NO MIC IN on a Smart Phone Or Android Tablet, Not even on a iPhone Or IPad.They ALL Only Gave HEADPHONE OUT. . BUT The TRRS Jack's CONVERT Them To BOTH MIC IN As well as Headphone Out. So Go for It Man. Do Your Conversion, USB toThe XLR & Best Wishes on that & I hope it Works, (Make a Video Charting Your Steps then Share it with the rest of Us and The World If & When it does. I think Chances are on Our Side. You Nor I are ruining anything. AND You Can Always Buy Another USB Cable

It can be done I’ve had my share of building adaptations. I started with only a iPhone and Smule app go figure. Well iPhone mic is good but to sensitive so I want to use stage mic. My only issue I had was having to amplify the headphones that way I can lower the volume on a device to keep it from distortion. Now own a Tascam mixer and considered trying the usb convert my question is why can’t we just use a second cable with the jack u need and just jump off that line for the sound but leave usb for the power supply but cut the wire the in put the mic on the usb side

it will depend on whether the microphones power is supplied through that usb cable. You can buy usb female to 3.5mm male adapters on amazon for a couple dollars but since power cant be passed through the 3.5mm to power the mic it likely would not work for you. Those adapters work on a very limited number of devices. If the mic has a seperate power cord then the adapter should work. If it is powered through the usb cable and you could identify which wires in the cable carry the audio you could cut just those and wire them to a cable with a 3.5mm end and leave the other wires connected to usb for power.

I don't think that would work because you see when a USB microphone is used it requires use of a driver on the computer which is required because analogue signal has already been converted to digital and is being sent through USB because of this using a USB adapter like the one you mention would degrade the quality as it will be acting like a very bad quality DAC(Digital to Audio Converter) and not worsening the quality of sound.

I am working on exactly the same thing. From what I can tell, the usb mic is powered by +5v DC supplied by the usb cable, whereas a conventional condenser mic would typically be powered by +48v Phantom power (which is technically DC as well). The problem with this is that the +48v and the +5v are supplied in different ways, and the phantom power (needed to boost the signal to a point that it can be heard by the mixing board or amplifier) is too strong for the components of the usb mic. I am currently looking into the possibility of replacing the circuit board but I am not very optimistic. I’m sure it can be done but I’m not sure if it’s worth this much time and effort.

Go to sweetwater.com and search for how to use USB microphones. They discuss how to interface them with a mixer. This will be a 1/4 Trs and or xlr connection. You can ask them a question and their sound engineers will answer it for you for free. But, their answer won't be conjecture it will actually solve your issue