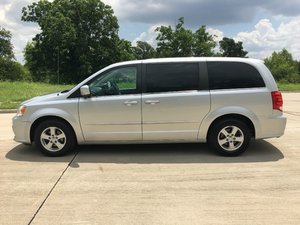 The fifth generation van had debuted at the 2007 North American International Auto Show with exterior styling by Ralph Gilles.

Is my engine really seized for good?

2014 Dodge Grand Caravan began leaking oil at an alarming rate. Each time I drove it, I had to add at least one at per trip, 12-15 miles one way but oil light came on if I drove it much further than 60 miles in one full trip. I made an appointment with my mechanic, but the day before I was supposed to drop it off, I was driving a 15 mile trip so I added a at of oil before I left. Midway, I got stopped in traffic and was idle for about 10 minutes. Once I made it to town, I was noticing a slight change in the way it was driving; Almost feeling like it was going to stall. I got stopped at a red light and it died. All lights, windows, locks, automatic doors, etc. were still working but I put it in park, turned the key, and only got a delayed “Click" sound from the motor. Mechanic replaced starter but then said I needed to replace the entire motor, as he tried to turn shaft and said it wouldn't move. He put old starter back in and it was towed home. Was told to try Kapo Kroil Penetrating Spray on pistons, let it sit for 3-5 days, then see if it turns over. I applied spray on days 1 and 6 of around 7-8 days and it's still doing the same start up dash/indicator lights all work but the same “Click” noise and doesn't turn over at all.

In your engine, there is more than one thing that could be affected in a seized engine. In all my years, spraying penetrating spray on the pistons is futile at best. You need to understand that when the engine loses oil, the pistons somewhat “weld” to the cylinders, the bearing in the connecting rods in some cases can “weld” to the crank shaft and many other parts. I have seen enough seized engines to know that you won’t likely break the pistons loose and even if you do the damage is done and the engine needs to be replaced or rebuilt.

Mine was similar (2012), but it was starter one time, and the alternator the next time. What was the final solution to your problem?