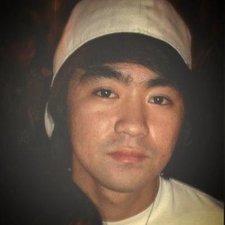 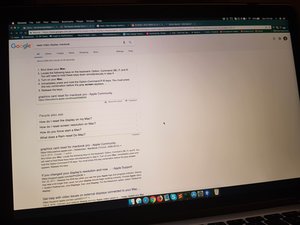 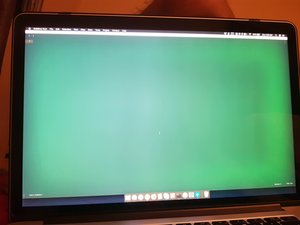 Not sure what's wrong with my macbook screen.

But they are perfectly fine on white / light colors.

Also the green goes out on it's own after 1 hour or 2.

Unlike the older MacBook’s which used LVDS signaling the newer retina systems use iDP signaling which is a very different signaling system. So the symptoms of colored bands and screens for a bad cable don’t show up here. This system is either a bad driver within the display or the logic board’s GPU logic.

What happens when you use an external display does the external exhibit the same behavior? If it does then the GPU logic needs to be looked into (likely needing a new logic board). If on the other hand the external display looks OK and the internal shows the bad image then it’s within the display and would need a new display assembly.

Did you guys find a solution to this? I am facing the exact same issue. There is a green and pink tinge to the whole screen when I switch it on or open the laptop after a few hours.

It is the display panel. Don’t go for confusing solutions like PRAM or SMC reset, they don’t reset the display problems. I fixed my issue by replacing the entire body with a new display. Problem gone.

Why is my display starting in Pink tint after coming back from sleep?

Hi! Encountered exactly the same problem. I already Reset the SMC, PRam and NVRam but nothing happened. I already reset and installed fresh MacOS but still the issue is still there. As long as my MBP 2015 13” is not heated like for 10 to 20 min the green haze / tint is there or as long I the display is not closed after you open for 10 to 20 min. What did you do to solve the problem? I don’t think the problem is within the display. Any solution what did you do with your unit? Thanks.

External display looks fine. It only appears when you first boot after 10-30 minutes of use it disappears but when you see to it closely after, the display will have mark or looks like a LCD burn of your previous display. Is there any fix if the logic board failed to display the right display? As I notice the green tint sometimes move on the side near the bezels of the screen as I close the lids of my MBP 13" 2015.

Sorry to say if the image on the external is clean all of the time then the issue is not your logic board as thats where the GPU sits that drives either displays.

Did you have a liquid spill or sit your system down on a wet surface? Your logic board could have been damaged where the internal display is attached otherwise your display is likely just showing its age. Screen Burn-in is a common sign the screen is getting old.

I barely used my laptop once in a while and I have notice that the green haze/tint is not at the same place all the time. But most of the time it is located at the center of the screen. Normally I used the dark mode but not I switch to Light mode because it really annoyed me when I started my MBP 2015. The haze goes away after 30 minutes to 1 hour of used or as the laptop heats up when using. Also it lessens the haze/tint when I do SMC resetting. Any idea for a permanent fix regarding this? Tried several resets even I did reinstall the mac os and back to zero. So far it works perfectly just the green haze upon start up that made me annoyed. Thanks for the help.