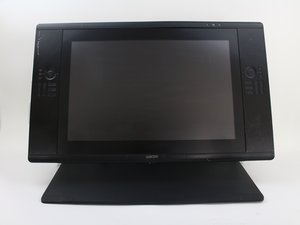 The Wacom Cintiq 24HD is an interactive pen display with a 24.1” screen and 1920x1200 HD resolution. The device can be used as an external monitor or as a pressure sensitive drawing tablet.

I've owned this Cintiq for about 5 years and recently I've noticed that it's getting uncomfortably warm to draw on. I try to typically run it at 55-75% brightness, contrast, backlight so it's not burning my eyes at full power unless I need to color check.

The fans in the monitor appear to work. They go full blast for a second during power on and then go to a low speed. I could only tell this because I tried air dusting it while it was on and off and heard the fans resist the air blasts. I got the dust out, but the fans don't ever seem to speed up even after long (2-3+ hrs) use. Wacom wouldn't tell me how they control fan speed apart from "an internal component" so I'm reaching out for any tips/info here.

Power cycled, factory reset, unplugged and held power button to discharge static, only thing that's helped has been keeping it at the minimum usable brightness and it's still running warm. So what should I do? Consider strapping on more fans with zip ties?

You may have to open the monitor and check that the fan blades / vents etc are really free from dust etc,.

Here is a link to the ifixit How to fix glitchy Hardware Control Buttons in Wacom Cintiq 24HD guide. It may be useful in that it shows how to open the monitor to possibly gain access to the fans / boards etc.

Don't know about your monitor but one of the usual methods to detect heat changes in electronics is by the use of a thermistor. Basically it's a resistor that changes its' resistance value in proportion to changes in temperature.

Sometimes they are mounted on the fans themselves to detect the temperature at this point.

The fans' high speed on power up may be just part of the startup procedure to prove that the fans work up to their rated speed, (RPM detected), and are then throttled back to their 'normal' speed unless heat buildup dictates otherwise. This is only conjecture on my part of course.