Keyboard and trackpad not working.

So, I just put the logic board from a mid-2012 MBP unibody into a mid-2011's shell. It booted fine, but the trackpad and keyboard don't work. Except to reset the SMC and PRAM. The keyboard works fine for that...

This person pretty much describes my symptoms exactly...

Built-in Keyboard and Trackpad not Working After Logic Board Swap

...including the flashing preference option.

The only suggestion in the accepted answer is to update firmware, but none of the firmware updates will run on El Cap. The App Store doesn't find any new updates.

Firmware sounds like a reasonable guess. The keyboard is clearly talking to the logic board since you can do the classic resets with it. I just can't figure out how to update that firmware.

Or maybe it's something else entirely. 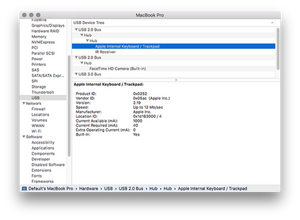 Well ok, no bluetooth, I guess. Which is interesting, but I never use it, so it's not a loss, really. But on the other hand maybe that is also a clue. Or maybe not.

Using the external keyboard & mouse opening up About this Mac > System report. Then jump down to the USB section You should have two USB 2.0 Bus entries. One with the FaceTime camera, and a second with the keyboard/Trackpad, IR Reciever & Bluetooth. Do you see these?

Two weeks and nothing, huh? :/

Sorry guy, you slipped by.

The internal USB bus for some reason is not able to see your keyboard or trackpad. The only thing I can think of is the keyboards & trackpad firmware need to be updated. Some how we need to trick the updater app to install the newer firmware. I remember someone needing to do this I just can't remember where I saw it. I've never needed to do this as I suspect the firmware was updated when it was still running with the 2011 board.

Any guess as to how to pull off this trick? My understanding is that firmware is packaged into security updates these days, which I am up to date on.

Where is the firmware physically stored? On the logic board? System drive? In the top case?

It's stored in the logic board. If software update doesn't offer you an update it's probably because your board is up to date already. If you have a spare hard drive you can try installing High Sierra..I'm sure that includes latest firmware updates and might do the trick. Good luck with it

@arbaman & @bugbrain_04 - This is device firmware which in this case is stored on the trackpad for both devices. Think of it like a external USB device its no different.

You think replacing the top case with the one from the MBP that the logic board came from would work, then?

Just the trackpad would be needed.