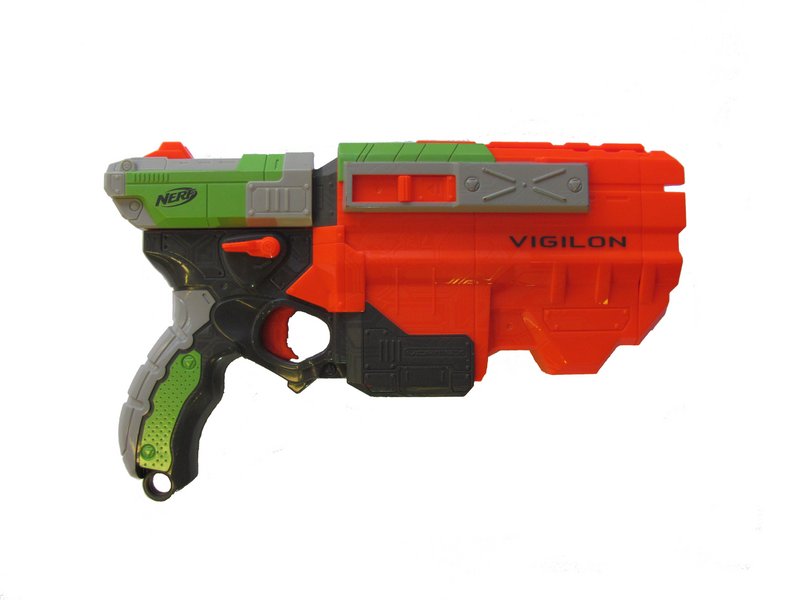 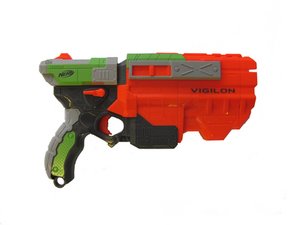 The Nerf Vortex Vigilon is a single fire toy gun released in 2011 as part of the Vortex series, model number 32215. The gun fires XLR discs and is green, gray, black, and orange.

If you're having issues with your Nerf blaster, refer to the Nerf Vortex Vigilon Troubleshooting Guide.

The Nerf Vortex Vigilon was released in 2011, and is intended for ages 8 and up. Upon purchasing, it comes with five XLR discs. Five discs fit in the Blaster at a time. The Blaster is spring-loaded and single fire. It has a clip point on the end of its handle that can be used to attach carrying devices. The model number is 32215, and can be easily identified by the word "Vigilon" on both sides of the gun. The gun has an orange barrel, with a green, gray, and black handle.

While the Proton and the Praxis appear similar to the Vigilon, they simply belong to the same Vortex series. The Proton is designed to only hold three discs at a time, and unlike the Vigilon, has a sight on top. The Praxis is much more elaborate, containing a ten disc magazine and a shoulder stock.

This device has no recalls and no common failures. Modification opportunities are limited due to its complicated internal structure, but tightening the torsion spring or replacing it with a more powerful spring is possible.