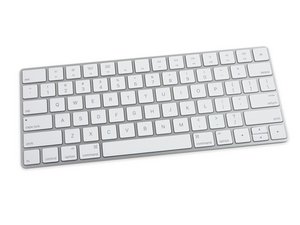 My keyboard blinks in span of 10 seconds when i press a key. It doesn't respond to the USB dongle.

I changed it's batteries several times and it still persists.

Has the keyboard worked OK before?

What type of computer is the keyboard dongle connected to, an Apple computer or a Windows PC?

If a Windows PC does the dongle show up in Device Manager when it is plugged into a USB port?

If the dongle doesn't appear in Device Manager then it is faulty.

If the dongle is shown in Device Manager, try downloading an installing this WiFi sniffer program to see if the WiFi is even working. It should show as a network.

Next unplug the dongle and turn on the keyboard and check if a WiFi network appears in the list. (not sure if you have to press a key or not). If nothing is shown at all then there's a problem with the keyboard.

If both the dongle and the keyboard appear to be working as far as WiFi is concerned then being unbranded makes it difficult if it is just a driver problem. Look in Device Manager when the dongle is plugged in, for the PID and VID numbers of the dongle. Right click on the dongle listing > Properties > Details > Device properties > hardware ids and find the PID and VID numbers. They should give you the manufacturer and model of the device so hopefully you can get drivers for it (if they have a webpage that is ;-)

The above is if it uses the standard 2.4GHz or maybe 5GHz WiFi band, but perhaps it is a different frequency who knows. So maybe finding the PID and VID numbers may also help with this to find the make and model number to hopefully find out more about it.

I don't know Apple OS so maybe @danj knows if there's a similar WiFi sniffer program that can be used in Apple OS to check if the WiFi is there or not. (Also maybe the PID and VID numbers for the device) ;-}

Hi @jayeff - As he had selected a Mac keyboard I'm assuming he has a Mac, as such there no WiFi keyboards as they require a special driver to work. There are Bluetooth keyboards they even allow multi-system access but they are based on BT not WiFi (even if the use here is just a single system). The need of a dongle then becomes necessary and that will require its own software to run. Most of the dongles based devices for Mac's have left the market and embraced BT.

Yes, there is also a WiFi sniffer which will allow you to see who is nearby like WiFi Explorer Lite

That only leaves a Windows PC or Linux system as an option.

Hopefully both of our answers have covered all bases. We'll have to wait and see ;-)

Thanks for your wonderful advices.

But let me make a clear understanding about my device.

The device doesn't has a specific brand. It is a combo wireless keyboard+mouse. The mouse works perfectly while the keyboard seems confused.

The keyboard was working very well and all of sudden it stopped functioning. I've connected it to my Windows PC. I will surely try the wifi sniffer if it relates my case.

Glad that everyone tried helping me contributing to me, I delayed because of my time zone and thanks for your patience.

Since the mouse is OK that means that the dongle must be also OK.

So it's looking like a problem with the keyboard.

Has the keyboard gotten wet at all?

Double check that there isn't a key that is permanently half operated on the keyboard. If there were then when pressing a wanted key there may be a confusing signal sent to the PC if you get what I'm saying ;-)

Depending on what version Windows you have, try starting the PC in "safe mode" (search online for how to start safe mode for your particular OS version) and then check how the keyboard works.

Only suggesting this because in safe mode only generic Windows hardware drivers are loaded and not drivers that are specific to the actual hardware i.e. manufacturer's drivers. This is just to eliminate if there is a driver conflict at all.

Also as I mentioned above, check the PID & VID for the keyboard/mouse combo in Device Manager and then search online using that info. It should tell you the makers name and the model number. Every USB device has its own unique Product ID (PID) and Vendor ID (VID) code number

This sounds like a WiFi keyboard not a Bluetooth keyboard. 2.4 GHz is a WiFi band not within the Bluetooth range.

You don't need a dongle if it's a real Bluetooth keyboard. Dongles are needed if the connection is proprietary as an example Logitech makes such a keyboard for managing multiple systems in a computer room. It requires a driver to work properly.