I’m a total beginner when it comes to soldering/circuit stuff. I’ve successfully replaced the batteries in my SNES carts without a hitch, but that’s basically it.

For a while my SNES has been having black and white screen issues. Reading about it online, I discovered this could be related to the trimmer for the crystal oscillator being out of sync. After attempting to adjust this multiple times, I found I was able to bring the colour back, but only for brief minutes or seconds before it went back to the monochrome output.

After doing further research, I was led to believe that replacing the crystal itself could fix my issues, as the problem didn’t seem to be coming from the trimmer. I ordered a replacement 21.47727 MHz crystal to solder in place of the original crystal.

However, I believe that during the process of installation I must have done something incorrectly, as there was no signal at all after putting the new crystal in. I was also not able to easily create joints around the pin holes (these have since been removed). I believe that in the process I damaged the traces and components around the area the crystal is located, as you can see in the image below: 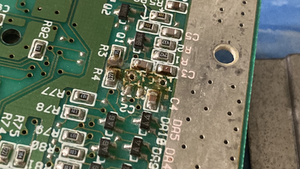 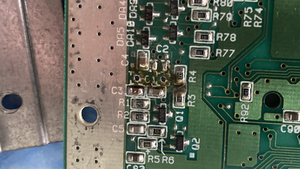 My question is whether this is salvageable at all without a ton of work. I’m willing to put some effort into repairing this if I have a bit of guidance in the right direction. But if it’s going to be too big of a task for a beginner, it might just be easier for me to buy another SNES outright.