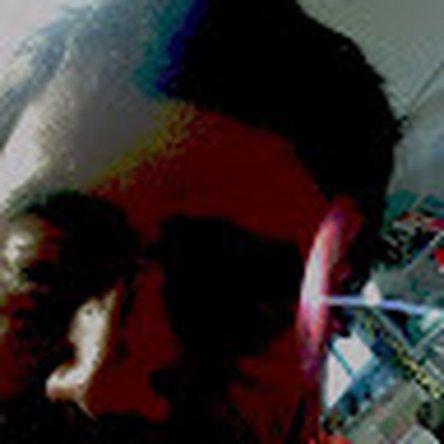 iMac not starting after upgrading CPU and pci-e storage

I attempted to upgrade my 2019 5k 27” imac by changing the CPU and the pci-e storage, and replacing the sata disk with more storage. I bought components and tools from OWC and a new i9 9900K CPU.

I followed the official OWC guide for getting into the imac, which seemed to work quite well, but when I put the components back together and before reattaching the screen I tried to start the imac to be satisfied everything was in order.

I pressed the power button. The fan starts, but there is no POST (or bong noise) and the display is just black. 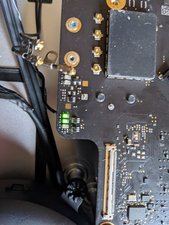 and it looks to my knowledge that LED 2,3 are lit when I power up the imac, LED 2 is lit when the AC is connected. But not LED 1 at any point, or 4 or 5 when the display is connected.

Does anyone know what to try at this point? I have tried reseating the CPU but get the same result. The other things I will try are:

Any other suggestions gratefully received before I sent for repair before inevitably deciding it is too expensive to repair economically.

Hi Dan, I don't think so though I've had to add and remove the screen to test it 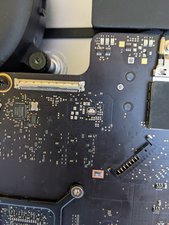 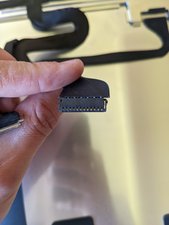 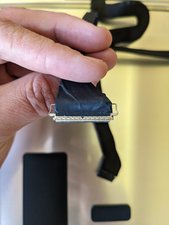 I'll have a read through your link, thanks again.

To answer this question - the solution which worked for the initial question was to reseat the RAM. The five LEDs then lit up as expected and the computer worked as upgraded.

I damaged the display power cable completing the reassembly of the iMac - the LED shows the Apple logo on startup but there is no backlight. I can’t determine whether the logic board has been damaged (probably given that the 5th LED is permanently lit as per @danj’s comment), or whether the cable is fried, and I need a new screen. I’m not sure it is worth paying to find out at this point when I have an external monitor which works for sure.

I hope this helps future ifixiters.

Hi! I got same problem, I have 3 diferent logic boards with Radeon Vega 48, all the same issue, led2+led3 and fan spinning. Ram, using default 4GB+4GB not starting, tested with 4x32GB Crucial compatible and same. If I do this with the default logic board, it works with the same iMac 2019 27". Did you use Command+Alt+P+R to reset the RAM?

Hi. @mepstein6 Can you share the processor i9-9900K model that you used in the upgrade, is it SGR19 or SRELS?

Mean that should work on SRELS version? Is the one that come with the special

Hexagon box, the SGR19 comes with standard box, can be the solution of my problem?

success, i upgraded to i9-9900K, but one disaster (hope not), after power up, the display has a hairline pinkish fine line. i checked again the eDP and it seems they are connected very well, but still there's this line. dang.

So to close this off, I managed to fix the iMac but there were two separate problems.

I hope this helps someone else - and thanks to all those who suggested fixes.

You’ll need to go back to the CPU as it’s not seated correctly and/or the socket pins are bent.

The iMac is a hard system to replace the CPU in, as the RAM cage and heatsink get in the way.

Hi Dan, thanks for your answer and the time you gave to write it.

I actually reseated the RAM which seemed to work when I tested with the display before screwing everything down. I got the full five LEDs.

But then when I put it back together completely the display no longer works. I get LEDs 1,2,3 and 5 whether the internal display is connected or not. Baffling. Is there any documents from Apple that explain the sequence of LEDs as without the display the fifth LED should not light up as there is no display to communicate with.

Are you sure you didn't damage the ribbon cables or their connectors?

Thanks for the link, I've read that as well. I don't think the ribbons have been damaged but I'm confused as to why LED 5 is lit up with 1,2,3 even when no display is attached.

Is that for the power for the display or the data do you think?

Hi! I got same problem, I have 3 diferent logic boards with Radeon Vega 48, all the same issue, led2+led3 and fan spinning. Ram, using default 4GB+4GB not starting, tested with 4x32GB Crucial compatible and same. If I do this with the default logic board, it works with the same iMac 2019 27". Did you use Command+Alt+P+R to reset the RAM?

I have tested also with i9 9900KF and got the same results, can be possible that the i9 Radeon Vega 48 Logic Board matches the CPU? I mean, I bought months ago a fresh Logic Board+i9 9900K CPU and I replaced without any problem. This 3 boards comes with Radeon Vega 48, two for i9 and the 3rd for ani5 3,7Ghz, without CPU. I have replaced the PSU, the same, but when I fit again the original Logic Board (i5 3,5Ghz 580RX) systems starts perfectly, no issue, all leds working, I mean that Display and connectors are ok, does any one replaced their i9 Radeon Vega 48 CPU or similar?

@biohazard32 - What I can tell you is the 2019 iMac Retina 5K Logic Board 3.6GHz i9 with a Vega GPU uses a different board layout than the 2019 Retina 5K Logic Board with the 570X or 575 or 580 GPU's. Apple has moved away from ID'ing the logic board layouts and now laser marks the board with a code which expresses the CPU/GPU and in the case of the 21.5" model SSD support or not.

You also need to use the correct i9 chip! Apple systems require the onboard (IG) graphics services even though they also have a discreet GPU (DG). The Intel graphics is used during POST and startup. So you need to use the K versions of the chip [(I5-9600K or I9-9900K) the lower end I5-8500 & I5-8600 only come with the IG. The newer 2020 system are more confusing in their CPU ID's (thanks Intel!)

Hi Dan! I upgraded the i5 8600 to i5 9600K without any problem, I have checked the bent pins also, and about thermal paste, first I used to, but as system won´t start, later on I placed only the CPU without thermal paste. I have read other users that gets LED2+LED3 after upgrading to i9 9900K but I have no one that have replaced the Radeon Vega 48 i9 Logic board. I have added pictures here:

@biohazard32 - I did do the PRAM reset, but what worked was physically reseating the RAM. Then I shorted the power to the display on the logic board (I think). Where did you find your other logic boards?