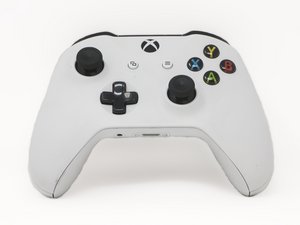 Xbox One controller introduced in 2016 with the launch of the Xbox One S and adds Bluetooth support for Windows 10. This controller is the current mainstream controller sold by Microsoft. This controller fixes many of the design flaws found on Model 1537/1697 controllers and is much more reliable.

Down on D-Pad not working

I have an Xbox one S controller that's not heavily used or beat up, as a while back, less than a year after I had gotten it (when GameStop had a good trade in program for the original model to get the S model), down on the D-pad is continuously registered despite my best efforts, and despite the buttons clicking and feeling like it's new. Microsoft refused to warranty it, so I ended up getting another one and sitting on it for a while, though I would like to fix it if I can.

So far, what I've done (after some intense Google searching) is taken the whole controller apart carefully and cleaned the board around the D-pad with 91% rubbing alcohol, and I removed that little sticker with the D-pad domes underneath it and cleaned both the board underneath that and the sticker as it seemed some dirt had gotten to it, but still no dice.

I plugged in the controller whilst open without the sticker with the domes on the board to see if that would make a difference, and it’s still registering down. After that, I used a DMM to test continuity between the outer and inner black ring contacts for that particular button, and there's no continuity so it doesn't seem like it's a simple short making it think the button is continuously pressed. I tried following the traces back to see if I could find something obviously wrong, like a bad resistor or something, but without anything to reference, I didn't get terribly far. SW12 is the down button. I also checked continuity to make sure there weren't any broken traces away from that bottom button. Those were fine too. 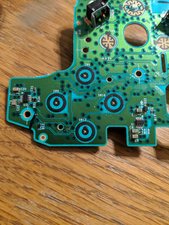 It's not the end of the world if I can't get this controller to work since I could probably get a new bottom board if need be, but if anyone here can help me get any closer to making it work, I'd be greatly appreciative.

Looking at the picture D12 seems a little "sad" (bottom left of the board, next to the marker line), it's connected to the down d pad. I'd say have a look at that

Here's how to test it: take your multimeter and have it in continuity mode. Place each tip at different end of D12. If you hear a beep D12 could be faulty. You should only hear beep when down on your dad is pressed

There's no continuity on D12. As a matter of fact, after probing some more, I found out that one side of D12 is the pad, the other is ground, so D12 is working fine and there's no short to ground that I can see.