MacBook Pro 15 2014 no backlight working and no battery detected

This Mac was bought from the previous seller with a defect on the battery which turns off when charger is disconnected.

I tried the new battery before changing it but the problem still was there, even making a SMC and PRAM reset.

Following a couple of threads, there were suggestions that could be a SMC issue caused by water, so I disassembled the mainboard to check it.

There was not any sign of water damage or visual issue on the SMC. The only issue that I saw was a little green rust on the J7000 magsafe welds. I cleaned it with alcohol and assembled again. The Macbook started normally and the battery still was not present.

After checking more threads about this, I opened it again in order to make a deeper investigation on any burnt IC. I have not seen any damage or any component which could be burnt. However, when I assembled it again the backlight on screen was not working.

Checking this two threads, I started to test all the components involved following the schematics for 820-3787-A board.

Lcd no back light

No backlight, fuse blown? Works fine except backlight! A1398

First that I checked was the fuse, which was OK. So I plugged the board and checked the voltage, which was 12.6V (ok)

Next, I tested the boost capacitors trying to find 55V but there was not. Following the fuse voltage I found that on the pin 4 of Q7706 (marked on red on the picture) there was 12.6V but some mV on the output.

Could be this IC the problem or maybe am I missing anything? 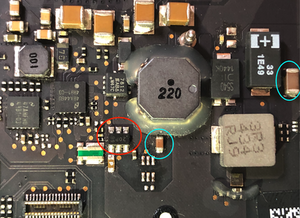 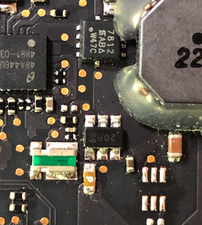 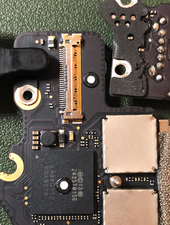 The blue marked capacitors have different colour then the other ones

Thanks in advance for your help