Sometimes won't power on, only has black screen & power light

Hi! I've got a 15" aluminum Pro that is not behaving. Typically when powered on, the optical makes its startup noise, the screen stays black, and the sleep light glows. The chime noise does NOT sound. Occasionally when I try various things such as reseating/changing the RAM, pulling the battery, etc., I'm able to get it to power on, screen and chime and all, and to act perfectly. When it does this it stays working for most of a day, but just when I think it's "fixed", it goes back to black screen/glowing sleep light mode. I've ruled out AC, battery, memory, and the memory slots.

My first thought is that this machine may have the Nvidia GPU issue, because it is within the range of machines that could potentially have the issue, and that issue is becoming more prevalent in general. However, I've dealt with many of those machines, and they usually do chime and act as if they are working, aside from the black screen, whereas this one goes into the odd mode I've described above, with no chime. There is no external video when it's in this mode, but external video works fine when the machine is working.

It looks like the test may be available on Torrents. Will let you know if I can get a successful download. This would be a great time saving tool if we can get it. http://www.torrentreactor.net/search.php...

sir if the laptop is not turning on then how test will run on this ?

SIMRAN with all do respect, at times the computer will run. rdklinc stated in his question at times it will run for most of a day. Furthermore for most Apple service centers the computer will need to be running to run the test and approve of the repair. Interestingly, it appears, the program writes it's results to the hard drive on the computer being tested as well as to the device being used to test it. In other words it is visible how many times the test has been run and the results of those tests when running the program.

I've seen Apple do the testing many times (although I haven't paid as much attention as I wish I had) but I can definitely say that the test does run from the diagnostic drive even when the screen is black. In other words, a Pro with the Nvidia defect still has enough basic functionality to write to the diagnostic drive, after which the Apple employee looks at the test results on another machine and takes note of whether the GPU has been pronounced dead or not. Like I mentioned, I'm not confident this particular machine has the Nvidia issue, in which case the test likely will not be able to run on the machine, and they will likely pronounce that the computer has some other issue. But we will see, and I'll post what I find out.

The place I use for downloads does not have it. Maybe someone else can get it and OldTurkey can put it on his server.

Be careful though -- I believe it's a tool that Apple sees as "Apple only", so I'd hate to see anyone get in trouble downloading/using/distributing it....

this is the best way to go there in apple store for checking if this model has Nvidia 8600M GT graphics then they will replace it within the 4 years of purchase of this laptop.

These computers were manufactured between approximately May 2007 and September 2008.

This is going to be either a bad NVIDIA or GPU solders and needs to be reflowed. I own mobilemactechs.com and I do them all the time for $250.

Is that really worthwhile, considering you can buy a new board for $200, and reflows are not reliable and generally fail after a matter of months, at best?

You have bga problem, need rework or reballing this bga chip.This solve your problem.

I´m in Spain,www.netcomplanet.com , we have a profesional bga rework machine to do this work,if you need contact us.

You have bga problem, need rework or reballing this bga chip.This solve your problem.

We are in Spain and we have a profesional bga rework machine to do this work,if you need contact us. 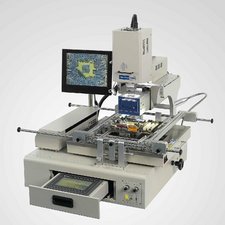 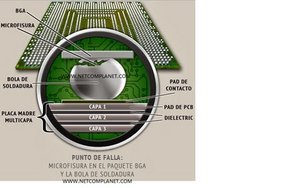 Hello. I'm wondering what the final solution was as I'm having the exact same problem.

One addition, I noticed the mac running hot and see some damage to the plastic strip that runs along the hinged side. The damage may have been there previously and I just noticed it, or the machine could have gotten hot enough to melt the edge of the plastic.

I'm not at all technically savvy, but I've been using macs since the beginning. If any answer could be broken down into layperson's terms, that would be fantastic.