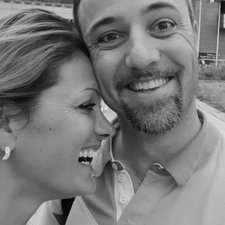 I decided to upgrade my 2017 iMac 27 in two parts this weekend: NVMe and SSD first, then CPU.

Second part, a day after: Removed CPU, installed i7-7700k. Struggled a bit with heatsink like everyone it seems. But once done I felt confident that everything was done right, so I re-assembled everything. But the power switch didn't trigger anything!

Does anyone have any suggestions or comments on what the problem may be?

Tempted to order that. Does anyone know if the 2013 and 2017 use the same power control cable?

After discussing with friends, one plausible explanation could be that my CPU upgrade went bad. Such as static electricity frying the Logic board. Or the CPU is bad. Even though I've been careful all the way. However, if I understand the explanations regarding the logic board LEDs function, it seems that not even having the LED 2 or 3 on would mean my issue isn't yet entirely related to the Logic board or the CPU. Anyone can comment on this?

I would be very grateful for any suggestions (at least it'll boost my morale, as right now if the new PSU doesn't work, I would have probably to sell the iMac for parts!!)

Just received the new PSU (see picture). Installed carefully (making sure I discharge any static electricity from my hands prior). Reconnected all wires, after inspecting them (see picture). And unfortunately I have the same result: the power switch, which seems to be 100% intact (see pictures), doesn’t trigger any response. Fan doesn’t spin. No second LED. 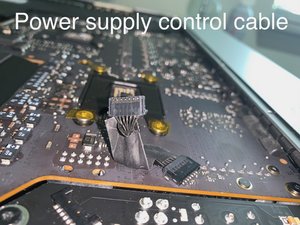 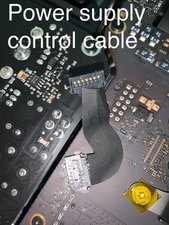 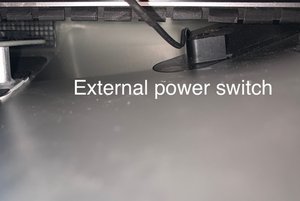 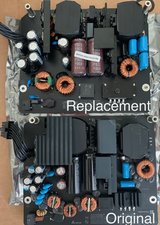 Could it be the main power cable socket (buried under the bottom bezel of the imac housing)??

Disassembled the Mac again. Look very carefully for damaged cables, or sockets… None found! Took a picture of the wires coming from the main power socket (see below). Everything looks fully functional.

Could this be a back Logic Board?? 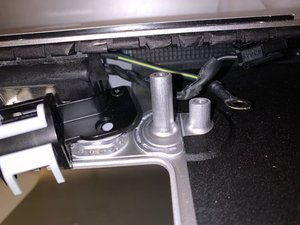 I can finally breath: Removed the new CPU, installed the old CPU and I’ve got the board to boot up. Did not perform a full reboot with the LCD on. I will make another attempt at upgrading tomorrow with another CPU, so I had only the PSU and Logic board mounted.

Is this a Bad CPU or it wasn’t mounted right, I can’t say for sure. But the Fan started to spin at max speed without stopping, so that got me thinking and decided to go for the i7-7700 instead of the 7700k!

Now, I got to improve my tension spring loading technique. I concur with others that the tension produced by this spring is excessive (Judging from the residue of thermal paste which had been completely squeezed out to the sides when I removed the CPU). So I’ve kept a more important gap between the mounting spring and the logic board, than what I had originally measured (<1mm). See pictures.

Hopefully my next post will be about completing this job… Wish me luck. 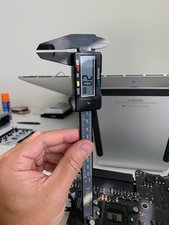 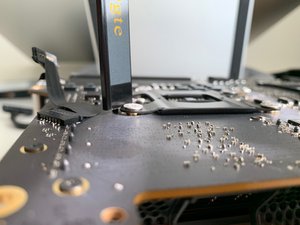 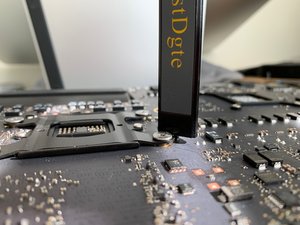 Final update: Finally got the system to work.

How: The short answer is you have to unbend the metal spring underneath the CPU!

There is way too much tension in this spring, this put so much strain on the CPU that it bends it. Some pins are then no longer connected. When the LED 1 or 1-2 lit up and nothing more it just means that.

I will now answer questions :)

Sadly, you need to roll back your CPU to check your logic board. I suspect you either have a bad chip or in the process you damaged one of the socket pins or lastly, mis-aligned the chip.

I was actually thinking of doing that. Just removed the Logic board and been staring at it for while.

Tightening the heatsink on this board was not trivial. Can the logic board pins be visually checked for damage, and what to look for? Mis-aligned seems impossible as you have two notches that would prevent it, correct?

--- Would love to have a bad chip. But 1. I may have touched the CPU's underneath and 2. When trying to screw the heatsink the spring plate underneath the board was sliding in all directions. Will post again when I re-install and test the board. Thanks for your prompt reply.

@danj Just posted an update above!

Reduce the amount of thermal paste! You only need a little bit so a film across the whole chip surface is covered.

Thanks Dan. Yes, I figured that out. It gets all squished to the sides everytime. So i've used less and less.

Having the exact same issue after installing 7700. Mac looks dead. Roll back to old cpu and system boots. How much did you end up bending the rear support spring and did you modify the screw down distance?

I’m also having a similar issue, but I’m upgrading from a 7700K to 9900K. macOS DOES recognize it as a processor since it’s the same processor in their 2019 iMac, but I can’t get it to boot. I’m going to run some experiments and see if it’s the pins on the socket itself.

The computer is still gutted, but I did some digging and while the SOCKET is identical from the 7700K & the 9900K, but the CHIPSET is different. Translation: While the i9 will physically fit, it won't connect. The pins mark to different readouts. I wish I knew this before, but the documentation on these iMac upgrades are extremely fragmented.

Hi, I’ve already f**** up 2 CPU’s because of that stupid spring. An i7-7700k and the original CPU. How bent were the CPU’s and can you still use them, even if they are slightly bent? Not looking forward at playing another 200-300 bucks.

You also mention to bend the spring on the underside of the logic board. By how much?

I bent mine back just by using my fingers. Tried it fingers crossed, didn't work at first, was just about to start cursing when - with power on (don't try this at home) I just loosened the screws just another bit. And it turned on, would you believe it! So yes, it can be bent back. Use your fingers and look down the edges to see if they're straight, and then be very careful on installing it back if that's possible at all. Personally, I'd try next time to turn the spring around and see how that works out.