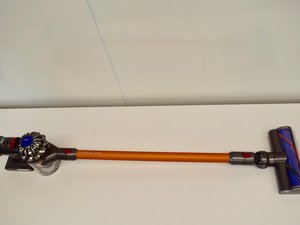 I just wanted to let everyone know the problem (and solution) I’ve had with my V8 motorhead (motorized) beater-bar brush head.

Problem: motorhead would start to spin when trigger was pulled, however once the brush was placed on my persian rug, the brush head would continue to spin only for a couple seconds, then stop spinning (suction still works, trigger still being pulled).

This would not happen when vacuuming my heavier larger (wall to wall) carpets (ie the brush head would continually function properly and not stop ever while vacuuming those larger/heavier carpets).

The cause of the motorhead stopping to spin, as I discovered, was because the thinner/lighter persian carpet (area rug) would get sucked upwards towards the air intake of the motorhead, and thus be sucked against the beater brush causing a large amount of friction against the turning brush, which the motor can not overcome (and thus the brush stops spinning).

This failure did not occur on my larger/heavier carpets as they have heavier base fabrics (or are glued/nailed to the floor), and so the carpet material would not get sucked towards the air intake (only the dirt gets sucked up).

Solution: For the persian rug I decided to lower the power setting on the V8 from “turbo” to “normal”, which would reduce the suction, and thus reduce the force that the persian rug would get pulled towards the beater brush. This solution worked perfectly.

Now when I vacuum that persian rug, I lower the power to “normal” and the beater brush spins the whole time, and never stops. When I return to vacuum the other wall-to-wall carpets I increase the suction to “turbo”.

Conclusion: If your Dyson motorhead is spinning when you pull the trigger, but stops spinning when you use it on a light/persian/small carpet, try to lower the suction to “normal” mode and see if that helps. It did for me (if not there may be other causes such as a blockage or burnt out motor etc).