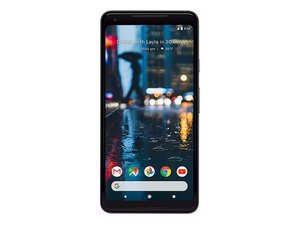 Issue after self daughterboard repair?

Due to a crack in the bottom of my display i believed that some water had gotten into that area and damaged my charging assembly as it was not charging but only maintaining power to keep on.

I ordered a used part from ifixit as it was cheaper. and replaced the daughter board without any issues with the repair. no bends, or breaks, everything went smooth. i powered it on and Voila the charger worked. i then unplugged it and plugged in a USB-C to 3.5mm TRS to test the data and DAC features if those worked and they worked for a few seconds as then the phone shut itself off. i powered it back on and attempted this with the power cable and the phone remained on a for a few seconds and shutoff again. I’ve troubleshooted a few times and if i plugged it in as it was in boot it wouldn’t shut itself off sometimes. and a few times in safemode it wouldn’t turn off. but this was inconsistent. my question is. That is there a different issue? is this an issue with the daughter board i added and or is this further up in the chip set? Or has anybody else experienced this issue and knows a fix. any information would be helpful and greatly appreciated.