My phone had the classic touch IC issues (no touch, grey bar at top of screen, etc). Sent it off for repair (re-ball with micro-jumper). I received it back with touch input working again, but there is now a faint dark line on the display. In the attached photos, it is below the apple logo during startup. 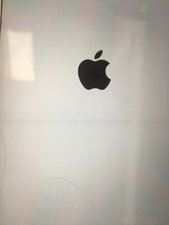 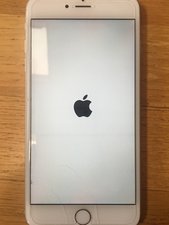 It is most noticeable with a white background. I did some troubleshooting with an identical phone that does not have the touch IC issue. When i swap displays, neither phone shows the dark line. The issue reappears when I swap the displays back. I am at a loss because I can’t determine whether the issue is with the display or the logic board. The only thing I know is that the issue is only present when this particular display is connected to the phone with the touch IC repair.

I could just leave the displays swapped (removing and switching the fingerprint sensors, of course). However, I want to know if anyone has any other ideas or knows what is going on.

UPDATE: After a lot more swapping, I’ve analyzed the flex cables and connectors on both phones with a 10x loupe. Nothing was apparently wrong. All the pins in the connectors and cables were perfectly lined up. I also cleaned it with some IPA and applied slight pressure at different parts of the connector when the phone was turned on, but was unable to see any changes to the display.

However, I did find that there is a BARELY noticeable horizontal line when I connect the affected phone to the display from the other phone. It is in a different spot that shows up lower on the screen. For those interested, I’ve attached pictures. It is very difficult to detect in person and even more difficult to get it on camera. I’ve highlighted where it should be in one of the pictures, and it helps to zoom out or look from a distance or stare at it really hard. It also depends on how good one’s vision is. 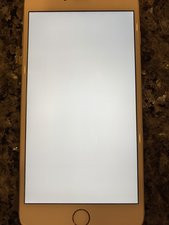 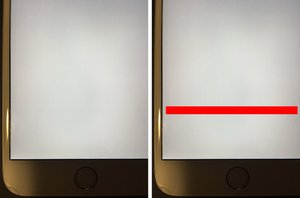 Given that both displays show up perfect on the other phone, I have ruled out the display and its flex cable as the cause. My best guess is that the touch IC repair loosened something or introduced particles underneath the display connector and that the different tolerances in the connectors and flex cable are causing the results I’m seeing from the swap.

Nevertheless, I will be doing the touch ID and screen swap since the results are much better than before. I doubt there would be anyone still using this phone and choosing to do the repair, but I hope this can help someone!

Does that line not line up pretty much exactly to the crack in the screen protector??? In left corner

That may be a coincidence. The crack has been there for a long time and doesn’t seem to be severe enough to flex the display. To be sure, I removed the screen protector and the line is still there.

It seems that your 1st phone doesnt match with the screen. I would consider that connectors are bad/damaged and it is one-time situation.

There is nothing that would point to soft/hardware damage. From my experience: I’ve had once an iPhone that shows random grids when turned on. It comes, that the display flex was little bit to short and the connector pops out of motherboard after placing the screen. In you case it seem that there is some damage or dirt on connector.

Thank you for your reply. The first phone (phone1) and screen are the originals that came together from apple. I’ve swapped the screens with the other phone (phone2) three times now with the same results. The affected display is normal when connected to phone2. Display from phone2 does not have the issue when connected to either phone.

So it could be the particular display cable and connector combination that is causing the issue. The display was definitely not like that before I shipped it out so I reckon the repair person must have damaged one or both of the components. It also doesn’t help that the display connector is directly opposite of the touch ic.

I will inspect the cable and connector with a loupe and report back.

Very strange situation. I would even say "Apple magic" :D

Since this situation comes only in this particular combination there is nothing to point on. I would go for swapping the Touch ID since it will be less work for you than searching for solution.

However if you'll be still digging into this topic please share the results of your research since nothing rational comes to my head.

I've submitted my findings as an update to my question. I think it will remain a mystery to me, but thank you for your input!