Alright, so. My iPhone 3G (8GB Black) turned off randomly one day and I plugged it into power. The apple logo showed up as per normal during boot, but after 40 seconds the screen dimmed and the device freezes. The same happens with the USB lead too. If it hasnt gotten to the frozen mark and I unplug it, it will then freeze.

The dimmed apple logo remains on the screen, even when I disconnect the LCD screen.

I was able to enter DFU mode, but upon restoring, iTunes would spit out an error 23 and the device would freeze.

Ive tried taking out the battery and booting it via AC power, but again it will freeze after the 40 seconds. Ive also bought a new OEM battery for it, but still receiving the same problems..

Ive checked all terminals to make sure theyre clean. Was a little bit of sand and dirt, but its all clean now.

EDIT: USB wont trigger a boot either after battery replace. Only on AC power

Don't think it is a battery issue, but anything is possible. the part that makes me wonder is the error 23. Error 23 is a baseband/radio error. It occurs when an unlock or baseband flash fails. It is my understanding that the way to fix it, is to get it out of DFU mode, which it is stuck in because iTunes can't read its IMEI number. There is a really good solution for that on here It may of course also be related to the heating issue which may have caused some damage to the power IC the onle solution that I have on that is outlined in the attached image and will require a bit of soldering ;-) and investigating. Good Luck and I hope this helps. 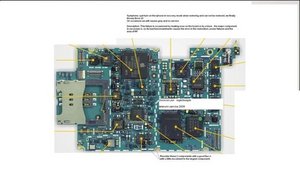 Hey, thanks for the reply. Soldering skills are abundant in this household, so shall have a look (Would it be possible to grab a higher res image to look at?) I forgot to mention (Probably a silly thing to not tell) it had been jailbroken at the time purely to unlock the phone. Thanks again for the reply and shall notify of any progress :)

Just looking at the USB control thing on the logic board. It looks like some pins are missing. Or is this normal? Tried to look at other photos, but cant quite see if its normal.

could be solder missing or pins..it looks different! I think we did a lot of help for someone with this problem and he replaced the power ic and all was good.

kizzacrash what are the numbers and lettering on the IC? I will check on the wiring diagram once I have the numbers. Oh, even better. Why don't you look at the diagram yourself as well? You can download the diagrams for the iPhones from my server right here I do agree with pollytintop, looks like some solder is off the pins.

Like I mentioned in my earlier comment, resons for error 23 are a failed update/flash of baseband or unlock. Mostly during jailbreak etc. Have you tried the other link yet and checked on that solution?

The IC numbers/lettering are as follows:

I did try that link, but after my edit (Cant use USB anymore to power up device) thats a no go.

Im starting to think its not too worth trying to fix it. Ive still got my iPhone 4, and was only hoping to fix the 3G as either a backup, or iPod touch with extra features.

Not to worry, I really do appreciate the help. This place is much better than alot of other forums, and Ill be sure to come back here in need of further assistance.

Error 23 is one of the very bad hardware errors detected by iTunes. iTunes error codes are never specific to the exact cause, but 23 is caused by several problems, mostly bad. But if your iPhone 3g is fixable, the two things that rarely have fixed others iPhones with error 23, is Battery replacement which you have done, and Dock Port replacement. If yours turns out to be error 23 due to radio error (which you will never know for sure) then yours could be very bad. Replace the Dock Port and cross fingers.

Actually what I would do before replacing the Dock Port. Is to carefully and very thoroughly clean the Dock Port with isopropyll alcohol, especially the pins which are on top of the dock mid rib. Then I would try the Restore again. See if it works. If not see what errors you may get. If 23 again, then replace Dock Port Assembly. I would get the whole pre-assembled piece with antenna, cable 4, speaker, mic, dock everything.

Hey, thanks. I have tried cleaning those parts already with the explained method, but no go.

I dont think its worth trying to fix anymore, its had a good run lol, and i think its time for it to rest in my cupboard in a spare parts box