Ive been given an iPhone 7 to replace my old SE. Everything works as it should except for the bluetooth. When you go into settings, instead of the Bluetooth On/Off switch there’s just a spinning disc.

I’ve been through all the troubleshooters to the point of restoring it back to factory defaults with the latest IOS, but it still doesn’t work.

However I have noticed that when I put the serial number into Apples website, it should be a different color than it is (Apple say it is rose gold, but it’s actually silver) so I guess at some point it has been re-cased.

Everything else on the phone works fine including the 4G and wireless. Can anyone suggest what might be the issue with it? 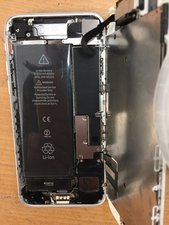 All that I know of that could help is to reset or hard reset. I don’t know what to tell you other wise, that really sucks. If it still doesn’t work try contacting Apple’s Support team: https://support.apple.com/contact. Hope this works.

If it has been swapped into a different shell then it could be missing and antenna, if you were to open it and take a picture I maybe able to help.

I've added a picture of the inside, though I don't think it shows much...