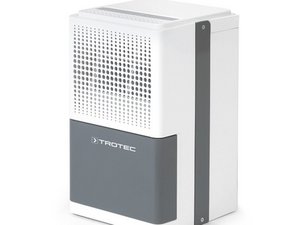 I can switch this dehumidifier on after turning it off & on again at the socket to allow the control board capacitors to drain, and the compressor does start up, but then after 10 seconds it stops, and both the indicator lights for tank-full status (red) and defrost cycle (orange/amber/yellow-ish) flash at the same time.

The operating manual does not mention this error.

I have checked that the bucket is properly seated and the fill-switch works - when the bucket is removed, only the red full status LED blinks, and the compressor will not start at all if I power up the device in that state. Removing or replacing the bucket while the device is on switches between the two aforementioned error states.

I have had this dehumidifier for just over 4 years now, running it for a few months each year, and it has been used in fairly cold conditions this winter, but never outside its rated operating range. I am currently testing it in a room at 18 degrees Celsius, where it has had over a day to warm up, so this makes no sense to me.

The normal behaviour was that in a cold room it would occasionally run a defrost cycle, with the amber LED lit up constantly while it warmed the coils, then continued working with that light off.

When I contacted the manufacturer about this error, their response was:

"Thank you for your email. unfortunately, this fault has not been found in the database and therefore, the device will need to be inspected for a repair.

Please can you tell me your order number and I can then see if the device is still under warranty."

Obviously, it is well outside the warranty, and I suspect that this error was a planned failure programmed onto the control board for obsolescence of otherwise perfectly functional hardware. (I can hear the compressor starting to work for those few seconds before the error stops it.)

A friend of mine also has a Blyss WDH-1012EA, which is almost identical in design, displaying the exact same behaviour, blinking a red and yellow/orange-ish LED for full and defrost errors straight after starting up.

There'‘s no specific information on your machine out there so I’ll give you general fixes:

When both Frost and TankFull Leds blinks, It is the FAN, that it doesn´t have the appropriate rotation and stops! I tested with a 3 wire computer FAN and went OK! I´m tring to find a FAN that fits. But ITs dificult.