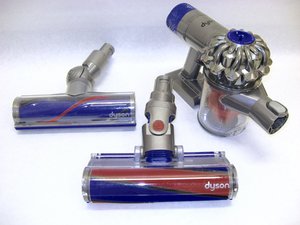 The brush head has stopped working. I have cleaned all the removable parts properly and put it back together. However it still fails to spin. The vacuum motor is working fine!

i’m aware that there is some sort of overload to protect the brush head motor in the case of drawing high currents, and im assuming it’s in the negative line, but where is it? And can I reset or replace?

I was having the exact same problem. I had it torn down to the point that you have it and was also confused as to why I was getting no voltage to the points that go to the power head. I even had an argument with the Dyson service tech over the phone, I was getting to the point where I was about to do my own soldering on the board to just put direct power from the battery to the power head brush….before I did this I decided to double check what the Dyson service guy told me, I cleaned up all the contacts with contact cleaner, even gave them a little brush with a piece of emery cloth. I did notice that the two contact points from the main motor body to the clear bin were pushed in a little so I slightly bent them out more so it would make a more solid contact. Low and behold it worked, the brush started spinning again. I feel really sheepish since the Dyson guy told me 9/10 times this was the problem but I refused to believe him since I was getting no voltage at those two points, anyways give it a try.

Thanks, it sorted my problem out too!

I have the same problem.

I had zero volts on the brush head supply terminals and have cleaned and tensioned the connectors but still no power.

When the brush head is connected and I pull the trigger the vacuum starts then stops then starts again and continues with suction but the brush hasn't moved.

When I pull the trigger without the brush connected the vacuum starts with no stop and start again. Could this indicate a sensor stopping the power for some reason?

After assuming the power to the brush wasn't being given for some reason I manually rotated the brush and found it a little stiff even though there was no hair or the like tangled in it. I tried the power again and noticed it moved slightly then stopping again. I repeated a few times and it has started to work again.

I am now of the opinion that the power isn't supplied if the brush head motor is too stiff due to a fault or tangle, so after cleaning all electrical connections try loosening the resistance of the brush motor by giving it a few turns.

I have just put a tiny drop of wd40 to the brush drive bearing and it's working great. Fingers crossed, if it happens again I will be thinking it's the brush head rather than the supply which is disconnected at source to protect the vacuum.

I had the exact same issue and this was the solution! thank you so much for posting your story!

I think that the Main Body PCB does not deliver the voltage if it does not detect a load - e.g. when a crevasse tool is connected. I found that when I used the mini-brush (also motorised) it started to spin. This meant that the main unit was okay and the fault was with the brush head.

I dismantled the brush head and found that one of the wires connecting to the motor, through the articulated joint had broken. There was enough play in the wire to allow me to solder the broken wire back together. I'm not sure how long this will last though as the wire moves around when the head rotates. I guess at some point I will have to replace the whole wire.

I have also had the problem whereby the dust accumulates at the contacts from the main unit to the dust canister. A pair of tweezers and some rubbing (isopropyl) alcohol soon sorted that.

hi I have the same problem, I’ve tested the mother in the brush head and it’s ok, I’ve tested continuity to both wires from main unit to the brush motor and that’s ok help

I had the same problem, the wire was broken in the articulated join. I was able to make a bypass and motor restarted to work. In some points the wire is really compromised, I should plan to rewire it all, but at least it is working fine now

This happened to me. Broken wire at the articulating joint in the brush head.

I had same symptoms so I disassembled the head and there is a small Torx screw inside the plastic piece that spins the brush (pointed to in the picture below). After you remove the screw then you can pull the plastic piece off. There was a lot of hair that had gotten underneath that brush driver and once I had it removed the motor could spin a lot easier and the problem was solved. When putting the brush driver plastic piece back on don’t overtighten it. Check the spin is good. 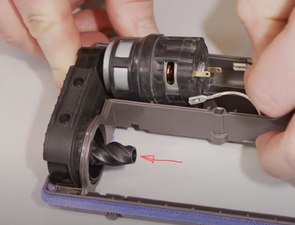 I am an old lady of 77 but usually try to DIY my repairs however non of the advice makes sense to me. My small rotating brush head stopped rotating so I got out the big turbo brush tool but the brush in that didn't turn either so it's not the brush heads I looked for the connectors that is spoken of I found a couple cleaned them no go the motor on the main machine works well

I recently had to replace the battery its not a dyson battery but fits perfectly and runs the vacuum for well and longer. Could the battery be at fault. I've got to solve it I can't afford professional repair or replacement vacuum. Can someone advise thank you Beatrice 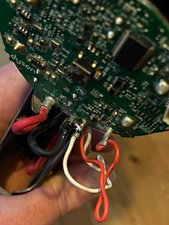 Ok had exactly this issue and it does appear that Dyson engineered the solution to prevent high current drain with stuck motors. Took mine apart and occasionally got some power to the brush head but normally no power at all. Maybe a dry joint on the PCB? I have no idea.

So I did a brutal hack. Turns out the +ve power is connected from the battery input to the power tap off whatever happens - but ground is switched.

From the photo, ground/-ve is the white wire. Handily right next to the feed from the battery. I dropped a big blob of solder across the wires, so now the accessories get the full blast from the battery when you press the trigger.

I really don’t recommend this fix, but it was (to me) preferable to giving Mr Dyson a few more £’s for his poorly made devices.

The V6 now powers the accessories “like new” and I’m not surprised. I think the motors are rated at 18v and now they are getting the full 22v juice from the battery pack!

Spot on Kev! We could drop the voltage a little but honestly I’m not worried about the longevity of the %#*@ thing, the amount of times i had to solder the snapped wires inside the brush heel just to make it spin again made me hate the thing with passion, at least it spins again... for now.

I have a DC44 Animal with the same problem. As an electrical engineer, I can tell you that if the power feed circuitry detects too much current (because of hair buildup etc) OR if there is no current (because of a broken wire or faulty motor), the voltage to the power head is disabled. That is why we see so many of these things starting and then stopping. In my case, I have a intermittent wire to the head motor that makes or breaks depending on the the position of the swivel head. Sadly, try as I might, I cannot open up the swivel unit that houses the slip rings which would give me access to the broken wire. Does anyone out there know how to do it? There must be a way, but it has defeated me and rather than spend more time on it, I have reluctantly ordered a new head unit.

I have the same problem. Cant see an easy way to get to the slip ring and find the broken wire.

Did you manage to fix this in the end?

just apply a little more strength. Ping me if you need step by step instruction. I will try to make a tear down manual