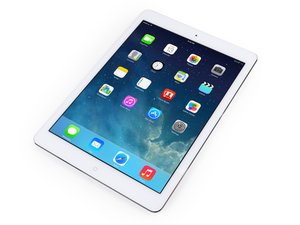 No charging symbol, but still charging!

OK, rather a strange problem here. A customer brought an iPad in saying it won't power up and won't charge either. I briefly got it to power on and saw the battery was at 1%. It wouldn't stay on long enough to do anything useful with it.

He said it had been lying in a drawer for over a year and thought it was the battery.

Anyway, I took it apart and have hooked up a new battery. It powered up with a battery level of 73%. However, when I plug in a known good power cable/charger or even a USB3.0 laptop port, the charging symbol doesn't appear, yet after about an hour of remaining plugged in, the battery now shows 84%. The iPad is also detected ok by iTunes, but not sure if that conclusively proves the port is ok.

Dare I risk it and put it all back together, or is there a hardware issue that I need to address before I do so?

Let it charge overnight. Ideally, you want to use the larger iPad brick, not the small square one they ship with phones as they don't deliver enough current to charge quickly. Computer ports are even worse.

If you have access to a USB Ammeter, you could use that to determine if the phone is really drawing current when it says it's charging.

If it charges properly overnight, I would turn on the display at full brightness with no auto shut-off and let the battery almost completely deplete (stop at ~10%)...then charge it up again. If it handles this, then seal up the device!

Thx. It charged up to 100% ok (initial). I'm out tomorrow, but will try the full cycle when I'm back. Sounds like good advice. I'm also going to try a factory reset and an update to the latest iOS version offered (11.4.1) first as it's currently running 10.2.1 still.

First thing I would do is run Coconut Battery on it to see what I’m dealing with.

Thx. I ran the Mac version. It came back with:

Apart from only having 96.9% of Design capacity, I don't see anything of much concern there?

Adding an update. Installed the iOS 12.4.7 update this morning and amazingly the iPad now shows the charging symbol when the charger is plugged in! This is the first time it’s done this in like 4 years!

Guess it must have been some weird iOS bug that’s finally quashed. Well done Apple. Got there in the end!