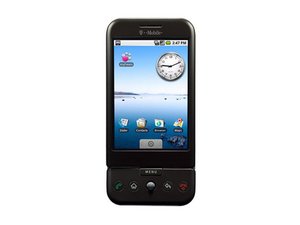 The T-Mobile G1 is the first smartphone to be marketed running the mobile Android operating system. Released in September 2008.

Why did the phone stop getting a signal?

Recently my phone stopped getting a signal. Having no memory of dropping it, bumping into something with the phone in pocket, or placing it near any liquids, I can't figure out why the phone says "No Service". Accessing Settings>Wireless Controls>Mobile Networks>Network Operators, and selecting "Search Networks" result in finding either AT&T or no carrier at all. However, tapping the bottom right corner of the phone (Front Side) gently, on something such as the inner part of the knee, sometimes enables the phone to acquire a network connection. Strangely, placing a call while the phone is connected to a network will put it back in the "No Service" state after only a few seconds, while texting or simply leaving it be will allow it to remain in service much longer. Is there a solution??

No such thing as "jailbreaking" for android. You can, however "root" your phone, but that's a completely different thing. Android doesn't need to be "jailbroken" it's just open to begin with. And there's a reason why they call it the T-MOBILE g1

rab, that's not true. Android isn't completely "open" as you say!! and just to inform you, the term "jailbreak" is also "rooting". All jailbreaking does is allow Root access to the System.

If it were completely "open" as you say, there would be absolutely no need for "rooting".

Sure, you do need to root to do somethings, but everything you jailbreak on iOS to do you can do right out of the box on android

Well, either way Rab, you have to "root" both platforms to get full access to the system.

While this may sound like a hardware related problem, we must also look at the software side. What you're describing sounds like an issue with the radio. Is your phone rooted? If so, are you running a custom ROM? It could be that you're running an incompatible radio and it's causing issues with your signal.

Try a new sim card, whenever I've had a problem like this it's because the SIM is bad.

I did not mark any comments as such, I have no idea what you're talking about. Why the downvote?

I didn't. Not my style... You have to be rude or very wrong to get a downvote. In mod it says you voted a comment spam/offensive from ab.? I see he deleted his comment about jailbreak so maybe he sorted it out.

No, I don't remember ever voting a comment as offensive

Jailbreaking is done to 1. Unlock the bootloader so that unsigned system code (other OSes, iOS downgrades) may be run, 2. Enable sideloading of applications from sources outside of the iOS or other "app store", and 3. Gain UID 0 (root) access.

On Android, "rooting" is almost always #3 by itself. The vast majority of Android phones already have bootloaders that will happily load kernels and OSes not cryptographically signed by the device manufacturer. In the few cases they are "bootloader locked", unlocking can often be done simply by using an official utility from the device manufacturer. Just as well, the vast majority of Android devices have the capability to install sideloaded applications. "Enabling" this feature in these devices is as simple as checking a option in the system settings. In short, we distinguish "rooting" from "jailbreaking" because "jailbreaking" always encompasses all three whereas "rooting" rarely involves anything outside of #3.

I have an IPhone 6S Plus, where and what is the bootloader?

My phone quit getting signal and went to no service a little over 3 hours ago, my fiancé and I did everything we could to figure out why but we cant