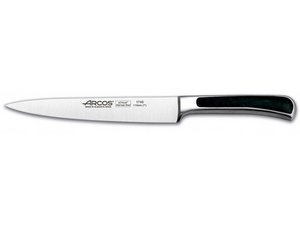 Stripped micro screw (countersunk); need ideas on how to remove.

I have a ZT (Zero Tolerance) model 0808 folding pocketknife that has a stripped TORX head screw (originally T-6 bit), one of four that's used to hold the metal grip panels onto its internal frame structure. The screw is extremely small (thread size unknown; ZT so far won't tell me that info), and is set into a countersunk pocket in the grip.

This pocket makes cutting a slot using a rotary tool and cutting bit like a Dremel impossible, at least without damaging the grip panels of the knife at the same time. To complicate matters, ZT used a mild thread lock substance when they originally assembled the knife, something I didn't think to remove before I began screwing down this fastener (well, overscrewing it actually).

All of the Grabit-style screw extractor bits that I've found and looked at are sized far too big to cut into this tiny screw. I've already tried soaking the area with penetrating oil with the hope that some might get down into the threads, then hoping to use a 1/16" hex wrench to hope to get just enough 'bite' on the stripped screw pocket. But no joy so far; the screw hasn't budged any.

I'm hoping for some ideas on how to proceed. I can leave the screw in place but as the knife gets gunked up with lint and such I really would like have the capability to be able to clean it from time to time, even though my last cleaning session resulted in the stripped screw.

Any ideas would be welcome.

I'm not joking... show it to your dentist. He may give you a bit for your hi-speed dremel.

I restored an antique clock for my dentist. He handed me a small box of assorted drill tools,

saying "here, I'll bet you will need these".

That old clock had tapered brass pegs, with 100 years of corrosion.

I once had a set of left-thread screws extractors,,, but a #6 torx is really small.