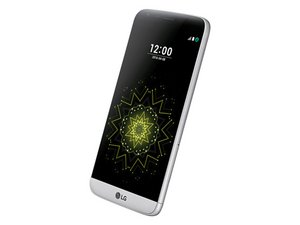 I recently left my phone in the pouring rain for about 10-15 minutes (long story, i'm an idiot basically) and now I'm left with a dead back light. After sitting in rice for about 3-4 days, everything was working perfectly other than the "auto" brightness option (it would just stay on whatever setting I left it at). But recently my back light decided to give up completely and I'm only able to /barely/ read my phone by shining a flashlight on it. As far as I can tell, everything else seems to be working fine!

It's been a little over two weeks since the incident (backlight stopped working 3 days ago) and I KNOW I shouldn't have waited this long to take apart my phone, but I was terrified to do it until now~

Here are some pictures of the water damage:

If it isn't obvious, I don't have a whole lot of an idea of what on earth i'm doing, but i'm assuming this blob (corrosion?) is part of the issue) 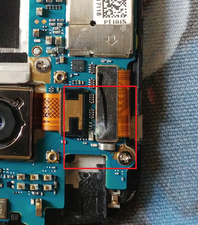 I can also unscrew the logic board if needed (:

So my question is -- Are there any areas that I need to NOT get isopropyl alchohol on? I know I need to use something stronger than 90% so I'll have to go search for that :p

And after cleaning everything, do you think if I replace the LCD screen WITH the frame attached, it will fix my backlight issue?

Thank you for any help!!

@tayloroo the best thing to do is to let us see what your board looks like after you cleaned it. From your before images it appears as if you are having some components that got damaged. Post an image like the last one in your question and let us see the board. Use this guide to add images directly to your question. To clean your board I suggest that you follow this guide. Even so it was written for an iPhone, all the points are pertinent to your phone as well. If you cleaned it properly and you already ordered a display, I would replace it as well as the battery and then re-evaluate.

I will need some help getting my phone apart again, so once I have a chance (and someone to help) I will go ahead and take some pictures and post them here (:

I have the exact same problem with my G5. I forgot it was in my pocket and went in a salt water pool for about 2 minutes before I realized it was in my pocket. After putting it in a bag of rice for 3 days and let it dry on my table for another day, I decided to powered it on. Everything was working fine except my volume up key and the screen was dark (stuck at 30-40% brightness) and I had water bubble inside the screen.

The phone worked like that for about a week before I decided to replace the screen, thinking it would solved everything. I took everything apart again and cleaned all the contacts with 99% isopropyl alcohol. I used Qtips on all the contacts on the back cover and on the logic board. I was able to remove most of the white stuff "corrosion" by just lightly cleaning the contacts. I also cleaned the interior of the case and pretty much everything inside the phone, but very lightly.

After reassembly, my volume up key was now working again, my screen was replaced and working fine, but the brightness was still stuck at about 40%. So for sure, the problem comes from a part on the logic board, not the screen.

I will disassemble it again and clean more thoroughly as I wasn't able to remove all the "corrosion" the first time. I will also be a bit less gentle this time. Hopefully it fixes it like it did for my volume up key problem.

I think that is the only thing we can do at this point.

I'll let you know once I'm done with my second cleaning.

Interestingly, I have "corrosion" at the exact same spot (between those 2 connectors) as you on your last picture.

I ended up scrubbing it all off with 91% alcohol (all I could find :x) and putting it back together, but It didn't seem to have any effect.

Interestingly enough, I ended up dropping my phone and cracking it in 2 places yesterday and NOW the back light has turned back on ever so slightly (can only see the screen in pitch black) ...???? Strange.

I ordered a new screen after I posted this (before I cracked mine LOL), so i'm wondering if I should even bother replacing it :(

Thank you for your feedback~

Hi, i too had have an LG G5 that was dropped in water back in January, After that day my backlight never worked the same. either it didn't work or it was so dim that i could only use it in doors. in addition my headphone jack was crap. so i decided to take my phone apart and clean the contacts ( i used to fix phones for fun so im pretty comfortable taking it apart). I spent alot of time cleaning the contacts for the screen. i cannot stress this enough make sure you get them as clean as possible. my cleaning tools were a very small flat head screw driver, Qtip and cologne ( mine has alcohol in it). After cleaning, plug your battery in to the charger without placing it in the phone, so its just the speaker deck and battery plugged to the wall. Next take the phone (with the phone still out of the body) and gently slide the battery into its place. the screen should light up with a charging sign, (Now this is the trick) If your LCD doesnt light up but the orange light appears indicating that the phone is charging, lightly press on the top of the screen connecting cable on the motherboard. the pins towards the top control the screen brightness. if this does the trick and your screen lights up then you are ready for the next step. now what i did next was take some tape stuck in the phone body right where the screen cable would rest so when the phone is assembled the tape presses agains the screen connecting cable. Good Luck

My phone (LG G5) recently fell in the rain. The screen works well like a custom (before falling into the rain). But the temperature of my phone is very high. The battery does not last very long. is there a solution ?