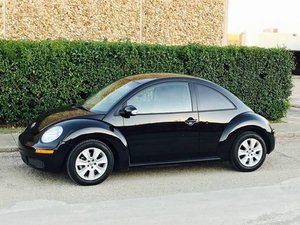 A highly stylized new generation of Volkswagen Beetle, called the New Beetle, produced from 1997 to 2011.

Had relay switch replaced on 05 beetle then...

had that fixed,supposedly having a lot of "brake dust all down side of car"

Was told when it was scanned, had 11 issues

Mechanic stated cleared all and it should reset itself, now blue temp/coolant warning light is on

I'm starting to think I'm sinking money into a car that isn't worth it.

would clearing it and hope it fixed itself sound logical?

@pamsbeetle05, Pam, would clearing it and hope it fixed itself sound logical? NO!Sorry you are having problems with your 05 Beetle. Just clearing codes will not repair the underlying faults. I am sure the technician did this in hopes some of the issues may have been just a glitch or just to give a clean slate to see what would have to be dealt with. Now that codes/engine light reappears is confirming there is a problem and it needs corrected. If you feel you do not trust the shop presently working on the car try another good local shop and have them take a look. Some of the auto parts suppliers offer free code reading like Pepboys, Nappa, Advanced auto parts,etc and some of the guys are very knowledgeable and may have seen the issue's like your's often and put you on the right track. Until you get estimate on the repairs required, can not say whether it is worth it.

Good luck. I hope this helped you out, if so let me know by pressing the helpful button.