Some days later the screen stayed black again. Same procedure as before - everything worked again.

My problem is that the number of times that the screen stays black became more and more. Now, about 30 to 40 hard resets are needed to have a working screen.

If I light the screen from behind by a flashlight, I can see a picture.

Do you have any idea, what could be the problem?

I did several SMC and PRAM resets - they didn't help.

I am really desperate - such an expensive machine just won't be useful anymore?!

Thanks for your support!

I have been very lucky as the online shop where I bought the MacBook repaired it for free. They exchanged the display, the top case and the logic board. Now it's like new and works perfectly.

Thank you all for your help and advices!

It worked for me :

Shut down your Mac and connect it to your MagSafe adapter and a wall outlet as usual.

Hold down the Shift+Control+Option+Power button at the same time for a few seconds.

Release all keys at the same time, then boot the Mac as usual.

Try to re-seat the display cable going to the logic board. Do you use it in a very dusty environment?

If reseating the cable doesn't work it sounds like it would be a new Display being that it is working on an external monitor.

Yes, unfortunately I think that would be the only option :(

Hi, thank you for the comments!

I have some update. When I hold a flashlight at the apple logo on the back of the display I can see video. This tells me that 'only' the backlight is a problem - not video itself.

I was told by a small repair studio that the backlight fuse is corrupt. Does anyone have an idea how to solve this issue? Are the costs for this almost the price for a new macbook?

Hi, reseating the display cable did not work. I don't use the macbook in a dusty environment.

Take pictures of near the LCD connector to see if it is burnt, do you have a multimeter?

Try reconnecting the LCD cable from both the logic board side and the screen side (follow up to 8:25 here https://www.youtube.com/watch?v=ZLNUjeUL...). If this has happened with no cause, 90% of the time this will resolve your issue. Also, check the backlight cable screen side too, this may be disconnected (right next to LCD cable). Check the screen PCB for any liquid ingress.

Visually inspect the pins on the LCD cable and logic board LCD connector, to check for any melted plastic or burnt pins. Remove the logic board and check it for liquid damage, clean with 95%+ isopropyl if present.

If none of the above works, the logic board will be at fault and will need to be diagnosed. Can point you in the right direction if you have the tools and experience to microsolder, and have the required schematic and board view for your particular logic board. If you do not feel comfortable doing this, your best option would be to send it to a repair shop who have the tools and experience required to do this.

I have been very lucky as the online shop where I bought the MacBook repaired it for free. They exchanged the display, the top case and the logic board. Now it's like new and works perfectly.

Thank you all for your help and advices!

THANK YOU SO MUCH.

I just re-seated the monitor cable at the logic board and the screen (After watching the youtube video on how to replace screen) and it worked immediately.

My Macbook has been sitting around for the last 2 years because it’s been out of warranty. I really cannot thank you enough. 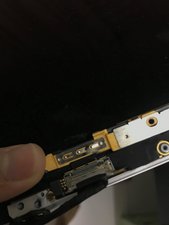 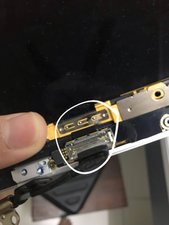 I accidentally splashed water onto my MacBook Pro screen. The MacBook works fine on external display but the screen itself is dead. Black and no Apple logo. Upon dismantling my Macbook, I noticed that there’s a burnt (looks like short-circuited) mark near the pins of the display. (look at pics)

Can someone please let me know what that part is known as? It’s near the antenna module but I couldn’t find the specific name to the part.

Also, is there a replacement to this part or do I have to replace the whole screen?

Mine looks to be burnt in the same connector, did you find the answer?