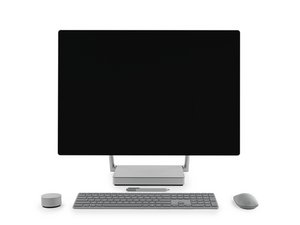 I upgraded to to a SATA SSD 2TB and a M.2 NVMe SSD 1TB and wrote my experience here:

I followed Cesar De la Torre’s guide (thank you very much!!!), but upgraded to a Samsung 2TB 970 EVO Plus M.2 NVMe SSD and a Samsung 4 TB 960 Pro 2.5-inch SSD. It works great and is extremely fast….the only major issue is that the SS 970 M.2 runs VERY hot….so you may want to think twice about installing the SS 970 EVO Plus into such a small form factor as the MS Surface Studio. I might suggest a WD Black sn750 instead because it tends to run cooler. The WD Black is a little bit slower, but you are not giving up much….I currently have about 6 external fans that I am using to cool down the computer….major hassle that is just not worth it in the long run…(AC Infinity fans coupled with a Thermaltake that I’ve got the SS sitting on….not that elegant, but it helps).

The other issue I ran into is that the Samsung Magician software will not load on the MS Surface Studio with this config….I exchanged a number of emails with Samsung and we tried a number of things, but ultimately to no avail….based on the SS Mag. log reports, I suspect it has something to do with how the drives were originally intended to operate (i.e., in cached “rapid” hybrid) and the Disk 0 (2.5-inch SSD) and Disk 1 (M.2 SSD) slots being switched, but that is just an educated guess at this point….no word yet from SS).

I hope this information helps those adventurous ones out there - best of luck!