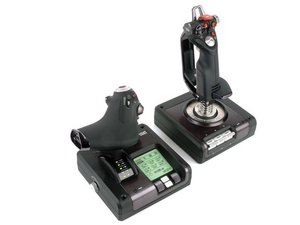 Repair guides for the Saitek X52 Pro HOTAS (hands-on throttle and stick) game controller. The controller was released by Saitek.

On the joystick side, buttons doesn't respond except toggle buttons

The throttle side works perfectly fine but on the joystick side, trigger button, pinkie button, fire a-b-c buttons and POVs are not working. Axis are working fine. I don't know what is the problem, it showed up suddenly and these buttons are working sometimes but they are really rare moments.

In my opinion its something technical, just like some connection problems between some cables. Because i tried the joystick on different computer with different USB ports and different drivers.

Hope someone can help me.

Thanks to you all for your replies. But i fixed it a while ago. @sirfrog 's manuel is a nice guide. I had to unscrew the joystick. A cable was disconnected to the board. I took it to a TV repairer and made it soldered to the board again. And it was fully functional again

There's a few things to troubleshoot.

First, does the stick light up as normal when connected?

If they do not, it's likely some power cable has been worn out.

Next, connect it to a computer (I'm assuming you're running Windows).

Find the "Game controller settings" for the X52. You'll find it in Devices & Printers.

You'll see a large table of buttons and their current status.

What are the state of the buttons on the joystick? Are they all on, all off or flickering? Do they react to being pressed?

Next, swap tab to LEDs. Can you change the colour of the LEDs in the stick?

If all buttons seem "On" (or flickering) and the LEDs are lit but unresponsive, you may have a damaged PWM cable. It doesn't have to be entirely loose to malfunction, just enough to wiggle and disrupt the sensitive timing of PWM. If so, try out this guide I made a while back on imgur. I'm afraid I haven't had time to move it to this site.

I just had the same issue pop up last night. After isolating the problem to only the push buttons on the top of the joystick, I disassembled the hand grip. The result was 2 of the colored wires that come up from base had snapped off of the wiring board within the handle. I probably could have spliced in new pieces of wire to reconnect them but decided it was better to buy a new HOTAS all together (mine has only seen light usage for 14 months).

It is unfortunate because the throttle works perfectly.

I'm in the UK needing the buttons for my broken stick. I don't suppose you are in the UK and prepared to part with the broken stick are you?

Use a multimeter's continuity testing feature to check certain connections

If there isn't any signal through a certain connection, you may need to strip that wire and replace it