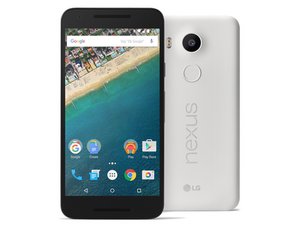 Update 4/1/16: No change to the phone, so I got in touch with Google and LG for resources, since I know the warranty is void. Google can't help since the warranty is void, so that left me with LG. Their customer service is the worst I've ever had. Too many issues to list here, but when an agent tells you to send a GOOGLE phone in without its back cover and battery, it's a bad sign. Just because it can be done, doesn't mean it should be. I was horrified that they insisted it could be done, even though the phone is sealed and I would need special tools. How on earth do they know for sure that it needs a new battery??? Anyways, it was shipped off for diagnosis today. They said once they figure out what's needed to repair the phone, they would call me to discuss charges. If it's irreparable, they say they'll just send it back. If it ends up being repairable and is sky-high to fix, I'll at least find out what the diagnostic said and try to fix it myself. Let's hope the technicians treat me better than the poorly-educated service agents. Unacceptable.

Over the weekend, my Nexus 5x took a quick dip in the toilet. I scooped it out and quickly turned it off (amidst the onset of screen flickering). So much for those "water resistant" YouTube videos where the phone doesn't skip a beat.

So far, after letting it dry for a few days (in rice, despite declarations that it doesn't work) as well as using a low-heat blowdryer on it, I cannot get it to come on unless it is plugged into the charger. Even when plugged in, it will display the battery charge symbol for a second with a quick vibe, before turning back to black. Upon holding down the power button, I get the Google logo flashing across the screen with a quick vibe...same thing, back to black. I have been able to turn the boot mode/recovery mode screen however (power button plus volume button), which stays on until I make a selection using the power/volume directional buttons, but quickly goes back to black again. Puzzling. I want to say it's the battery, but if that were the case, wouldn't it stay on while plugged in?

The phone is too new for the "fixit shops" to touch just yet....so I'm left with a 5 month old brick (should have sprung for Nexus Protect, I know, I know) until I can figure it out. HELP!

If you have water damage, do yourself a favor and don't waste your time sending it in to LG. If they see the water damage indicator has been triggered, they will automatically send it back without even touching it. 3 weeks and postage wasted finding this out, even though it was well documented ahead of time that I knew it had water damage.

Long story short, we ended up selling it in the boneyard on Swappa. Got about $100 for it. The guy who bought it replaced the battery and the screen and it works fine. Not really bothered by this, since I would likely have paid another $100 for those parts. Ended up with another used 5X...

It sounds like a new battery would be the first go to solution, especially with all the comments supporting this. Thanks for your input, guys!

Did you ever hear back from LG on what the issue was? My phone is doing the same things (will not boot, flashes power screen with a quick vibe and goes black). I am wondering if it is a battery issue and am contemplating buying a replacement battery

Had the same issue couple of days ago, were you able to fix yours? or did you find out more about the problem?

In my case I dried out the phone the best I could, then replaced the battery, booted up and the phone works as normal. The only issues are the screen shows some evidence of moisture and the camera is blurry. Maybe there is some way I could have fixed these but so far I haven't tried. Good luck!

My 5x took a nice 35min trip through the washing machine, spent 3 days in a bag of rice and powered up later. Screen still had some moisture, but I took a gamble and let it charge/discharge wrapped in some bed sheets to trap the heat, Phone is pretty much 100% except the microphones wont pickup, unless I toggle speakerphone, No insurance, At least its not a soggy brick ;;

I amazed it survived at all. That's an impressive soaking.

hi..did you guys can help on the liquid damage indicator (LDI) exact location in the nexus 5x?

If you take out the Sim tray, you should be able to see the indicator inside the phone. If it's pink, the damage indicator has been triggered.

Had exactly the same issue as you, and also had the power on + buzzing side affects.

I cleaned off the motherboard with Isopropanol and replaced the battery. Phone works great, minus a potential battery charging problem i'm looking at solving

Go to amazon, they have decent reviews. There's no such thing as a perfect battery.

I took my Samsung Galaxy 4 for a walk in the pool, not good. worked briefly. Tried the commercial hand dryer, the rice to no avail. Was able to get it start up in emergency mode, following directions in a manual. but even that was short term.

So how do you pull residual moisture out. Tried this AND IT WORKED!! Removed battery from phone, reinstall the back cover, place phone, backside on top of frozen ice pack for an hour, then do again with another ice pack.

The extreme cold causes any residual moisture to condense on the cover.

My girlfriend dropped hers in the toilet.

The screen glitched and then it powered off. I quickly disassembled it and then dried it out in a bowl of rice on the radiator.

After drying I saw the same symptoms as you.

Testing the battery on my electronics bench, I found that I could charge it and use it fine on its own when just using it as a dumb battery, but when I tried to use it to power the phone, it would immediately die and drop its output voltage very low (0.7 volts I think).

I think that it has some protection circuitry that the phone pays attention to. My theory is that dunking it caused that circuitry to disable the battery so that you don't try and use it. Lawsuit prevention and all that - a lithium fire in your pocket is a good way to lose the leg.

After messing with the old battery, I did find that with it plugged in, I could convince the phone to boot if I held vol down and power to enter the bootloader and then selected 'Start' from there.

It even charged the battery once booted. Problem was that it would die instantly if the power was pulled.

Anyway, took a gamble and replaced the battery with an Amazon knock-off and the phone is good as new.

I have a water damaged Nexus 5x. It was soaked in the beach for about 1 minute before it was taken out... the phone was only opened for drying after about 4 hours.

The phone's OS was corrupted and it will not power up unless the phone was connected to the charger.

So to try and save the phone, I bought a $15 battery replacement.

I have since rebuilt the phone's OS and it is now running. But the problem now is that the phone keeps turning off unexpectedly. For example, the battery indicator may say 97% but after a few seconds or minutes, the phone will turn off anyway. I tested the battery after removing it and the voltage reading was about 4.3 v so there is enough charge in there to actually fire up the phone.

So I re-installed the first replacement battery I had. And the phone is now powering up again. But it has to be connected to the charger for it to keep working.

In addition, the button for the 'volume increase' is also not working... but the 'volume decrease' and 'power' button works fine.

I have tried to clean any gunk and corrosion that built up due to the water damage and the motherboard appears to be clean. What do you think is wrong with this phone?