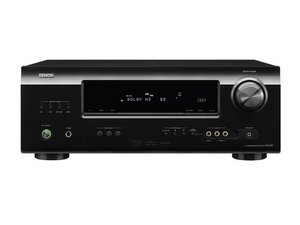 The purchased a new remote to solve this and it still doesn't work, something wrong in the actual receiver?

Have you tried resetting the channel levels back to the default setting and see if this may 'clear' the problem? 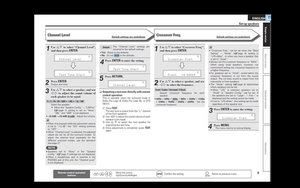 Try 'resetting' the system. If it doesn't restore the function after the first attempt do it 4 more times in a row before you try it again. (Have read that it can sometimes take 4-5 consecutive resets to fully restore the system).

Be aware that it will reset all your settings to their default values, so you may have to set it up to how you had it all over again. 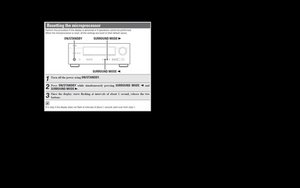 I'll try this when I get back, thanks!

Set defaults, remote does everything BUT won't control volume!

Did it 5 times, same thing, everything works on the remote BUT the volume!

Given that a reset didn't solve anything, to me it rules out a software problem. More than likely it will be a problem between the IR controller and the volume controller. I'm assuming that the manual master volume control on the unit itself is functioning normally, in that you can incrementally step the volume up and down. Hopefully @oldturkey03 will pick up on this comment and in his usual inimitable fashion produce a service manual for the receiver or at least a wiring schematic so that we may be able to assist you further, as I have had no luck in finding one.

Yes, the volume knob on the unite works fine, as well as every other function on the remote. Which is a newly replaced remote btw. Thank you!

dawaymusic, adjust the volume on the units master volume switch. Let us know what you get 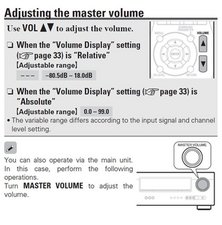 The units master volume does work, but the volume can't be controlled by the remote. The other controls on the remote DO work.

In that case the problem is between your remote and the unit. It is possible (unlikely) that the issue is the IR controller in your unit.

Strange, it accepts signals from the remote for everything else like channel levels, input select, etc, but not volume! I'll be playing some jazz in TX this week btw.

It indeed is a strange error. I'd hate for you to have to tear down your receiver to check on it. Houston or Austin for the Jazz:-)?

Up North, a saxophone conference in Lubbock.

No answer but a similar problem. The volume works but seems to be a weak connection. You must push the volume buttons several times and hold for a long time for it to work. Quite often it isn't worth it and I just adjust on the unit. All other buttons function fine. Above answers were helpful in what isn't the problem!

Just a thought on your problem, if you haven't tried a different remote control unit that is.

As the Volume button is one of the most "popular" buttons on a remote control after the power button, it may be that the conductive coating on the button contact itself has been worn away so that there is not much left to make a good connection when pressed.

Try opening the remote and cleaning the contact, (there a plenty of You Tube videos online showing how to clean IR remote controls)

if the contact material has been worn away you could try coating the contact with "conductive glue" (look for it on Ebay) and see if this solves it for you. I have had mixed results using this method. Sometimes it only works for a few weeks and other times it is still working. When it didn't work I just ended up using a new learning remote. (not that I have the same receiver as you, just a similar problem with a remote/receiver.

Tried that but I'm not as smart as the remote and could not get it open without fear of busting it. Had only 1 screw beneath the batteries. The kitchen knife pry didn't work and it didn't seem to slide open either. Ended up ordering one since all other buttons are working, didn't want to risk total failure. Hope the new one has volume that works.

Make sure you have a clear path between the remote and the infrared eye on your equipment. Clear any dust or debris that may be covering the eye.

Check the batteries. When you press a mode button, does it light up? If not, you may be out of juice. Check to make sure they are in the right way, with the metal ends making good connections with the metal in the remote. If they're in correctly and you still don't get power, try replacing them. They may be dead.

Check to make sure the remote is programmed properly, which basically means you reprogram it to work with your receiver, TV and any other components. Start with the receiver and work your way through programming each component that isn't working. We tell you how to program remotes in our guide to remotes.

But you can see from above....all remote functions work properly...it controls the unit completely properly...BUT won't control the volume ! Crazy!

If not, (I'm pretty not,) you must open your remote and clean the circuit and silicone corresponding to not working buttons . Before close the remote check again with your cellphone's camera.

Tip: start opening the remote from the front, right beside the IR led.

i dropped remote one end only one inch and volume doesnt work on remote and receiver. only one inch on bottom end when moving over tv remote

have one of these I just bought works sounds good, the remote has pull down area does every thing under the sun, remote controls every thing but volume, I know it works red light hits unit .. reciever but no up or down…

great unit ,I paid like $220.. every thing else works.hmm

John Hedstad's comment was very helpful and resulted in the successful restoration of my volume controls on the remote for my Denon model 1910 AVR.

I used a kitchen knife for spreading butter without a sharp edge to pry it open. I would stick the round end of the knife in the edge and twist the knife to separate the remote. One must be careful not to continue that action where the battery compartment is. First, one must open the battery compartment, take out the batteries and then unscrew a small Phillips screw. After that, one can continue working it apart or it might even easily open at that point.

Take note of how everything is laid out inside. It's probably not what you suspect. you must disassemble everything and there are a lot of parts including the motherboard with the infrared lightbulb attached as well as two battery contacts. Watch out for a small orange plastic structure about 2" long which has two buttons on it including the on/off button. None of the buttons are real buttons with switches.

On the back side, the buttons are rubber indentations on a rectangular rubber sheet. The rubber sheet interfaces with a light grey flexible plastic rectangle with many metal circles embedded in it that conduct electricity. When you push a rubber button, it pushes on the plastic which pushes the metal against contacts in the mother board. BTW you must also remove the motherboard with a Phillips screw.

Underneath the motherboard is a small rectangle containing the up and down buttons in a plastic rectangle also having metal electricity-conducting circles. Remember, the remote has buttons on both sides. One side has the buttons everybody sees and uses right out in the open and the other side has the rubber buttons underneath the hinged cover. Incidentally, the hinge is just a point of plastic at either end of the rectangle. If you accidentally remove it, there is a slight split at one end. Insert the point with out the slit and then you can decrease the length of the rectangle at the slit end. But I digress.

Once the volume buttons are out turn them over and clean them with alcohol. I just used on alcohol pad like you would use if giving an injection. While I was at it, I wiped the other metal circles near the volume metal circles. What could it hurt?

Put back the volume switch. Also put back the little orange plastic thing that includes the on/off button. Then put back the motherboard taking care to do a couple of things: 1) make sure the led bulb is fully in the hole where the light escapes. You may have to bend the wires holding it in multiple directions (all the bending is just slightly - take it easy). 2) You must also properly place the metal coils for the batteries. One coil has the final coil of the spiral inside the two teeny pieces of positioning plastic. The other coil has the front coil inside the other two teeny pieces of positioning plastic. You can use the coils intended for the other ends of the batteries which are embedded in the battery end of the remote for reference. But I digress.

Then take the plastic window for the infrared bulb and place it sideways where the LED bulb is. It will fit right in. It is symmetrical, so no worries as to which side is down. Take the other half of the remote and put the rubber buttons in the holes using gravity.

Continue to use gravity to your advantage and put the two halves of the remote together holding each piece sideways to the flat surface you are working on. Hook up the LED end first and then work your way to the other end. Make sure that the edges are all the way together. Don't force anything. If it doesn't go right away, there is a reason.

Try it out. It works, doesn't it? I can't believe it either!

[Thanks, John for this suggestion].

I had the same problem but it occurred after I was trying to program the remote. I lost the control over the volume. Could not get it back no matter what I tried. Finally ordered another remote which fixed the problem. After a few years I did the same thing again and same thing happened. Had to buy another remote and it fixed the volume problem. This is software related problem not a physical problem on the remote. The remote reset procedure and reset on the receiver do not fix the problem. I purchased a brand new remote on Ebay for under $13.00 delivered. Save yourself the headaches and go buy another remote.