What is the keyboard connector part called?

Hi! Does anyone know what the part is called where the keyboard connects to the trackpadhttps://d3nevzfk7ii3be.cloudfront.net/ig...? The clip to hold down the connector has snapped off.

Hey Dan, thanks for the reply!

It's the ZIF connector for the keyboard. I have tried to resit it in its original position, but no joy. Not sure if it's a real problem as i was about to replace the keyboard, whilst under the assumption it would be like the Pro i.e lots of screws. Computer says no. %#*@ rivets. But the keyboard did function before the Zif connector broke, except that alt was permanently being pressed.

@Dan, im posting my reply as an update so i can post a picture with it.

I understand that replacing a smt connection is next level stuff which i am , probably quite obviously :(, not capable of. But the keyboard connects to a part which is located on the top of the trackpad (internally) which then connects to the logic board via a flex cable. So i am looking for the part which is attached to the trackpad.

I realise it is quite possible this part isn't available, but i thought if anywhere this would be the place someone might know.

Thank you for your patience Dan ;) 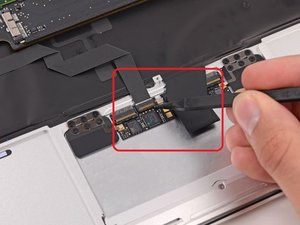 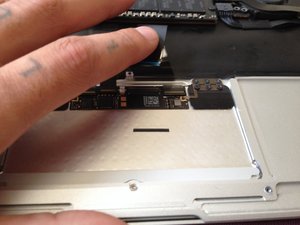 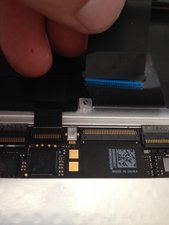 These are ribbon clinch type connectors. Can you take a picture of your connectors that are damaged so we can see more clearly which one needs to be replaced and if there is another option.

OK, the clamp part of the connector broke which pushes the the contacts down onto the ribbon.

To be honest we don't try to repair or replace these connectors. I'm not sure if you can slide in the clamp part without replacing the complete connector. I would look for a junker to see if you can swap out the connector clamp. Otherwise its a new logic board - Ouch!

Hey Dan, thanks again for your reply. Surely you're not implying i replace a motherboard because of 1 broken ZIF connector are you? I may be new to the game but that seems unrealistic to me. Also it's not the connection to the motherboard which is broken so the problem would still be there. I am confused :S.

SMT connectors are not easy to remove let alone replace without the special tools and skills of doing it awhile. Not saying it can't be done its just beyond what most folks can do (even me!) Thats why I was aiming you to a junker board to at least see if you can salvage the clamp.

I have found the part i need. A new trackpad. This is where the connector is located and ships with the controller and therefore a new connector. Thank you for your input @Dan! Much appreciated!