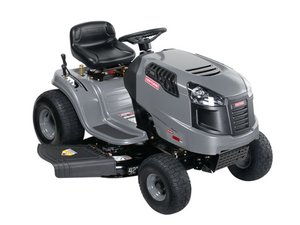 Repair guides and support for riding, or ride-on, mowers, also known as lawn tractors, of all types used in tending large tracts of land.

Hi we have a John Deere LA 105 and are having some problems. Everything seems to run fine until the blades are engaged. Turning the blades on seems to cut the fuel to the engine and the mower turns off. We've replaced all the filters and fluids and spark plug. Any ideas?

You should be able to located the seat saftey switch under the seat it must be faulty or have some wires naked and arcing off the frame I would suggest unplugging the safety switch see what happens if the blades engage then the switch if faulty.

Dude thank u very much cause I hAve an old JD 185 that kept shutting off every time I engaged the blades. And this answer solved my problem!

You might have hit something which caused the deck to bend and therefore, the blade to tilt. On mine, the blade was tilting and binding on the deck causing the engine to die.

Assuming there is no safety interlock that won't allow the engine to run when the deck is lifted, and assuming it's in the down/cutting position when you engage it, and, assuming the deck is not seized-up, which would probably stall the engine, engaging the deck slowly should allow it to spin up. I've had older ride-ons that nearly stalled each time the deck was engaged, due to a build up of grass, or bad belts. Can you (of course with the engine off) rotate the blades easily? If not, you need to look for binding.

Would a bad belt cause it to shut off?

My JohnDeere cuts off when I engage my blades.Ive checked all switches and that’s not the problem..Any suggestions

make sure it's not in reverse, or reverse switch could be bad. I was working on mine each time i tried to engage deck it would cut off . forgot i had it in reverse

I have a GX85 that is in excellent condition had it serviced regularly until a few months ago I am getting ready to move to a senior community and will be selling all tools etc. My problem is I went mow today and engine cranks great but put the the into forward gear engine shuts off cranked it again and tried to engage the blades and it cut off any ideas. Please help. Thanks

My D110 cut off when I engage the blade leaver. What may cause this to happen it runs great.