The CPU heats up and then computer shuts off

Even while the computer is just sitting there on, eventually it heats up to a point and then shuts down... I have temperature monitor lite program running and it has the cpu temp running around 80c when it shuts down the hard drive is staying around 35c and the fans start to really scream when its getting hotter... im assuming its a fan problem but i wasnt sure if anybody else had something similar happen and they were able to fix it...

First things first: reset the SMU, since it controls the fans too.

Could be that it is somehow corrupted and not controlling the fans properly (too slow/fast).

If the fans are at full pelt I would say the heat sink is not distributing the heat properly. Have you ever opened your iMac for repairs?

The first thing I always do with a non-iSight iMac that is acting up is open it (there are three captive screws along the bottom) and inspect the capacitors. If any are leaking or swollen, that is almost positively the cause of the problem. You can get this repaired for around $250. There are shops that specialize in it. Much cheaper than replacing the logic board.

If your caps are OK, then you can move on to other possibilities.

Along the heat sink idea, there was an issue with this with the 1st gen MBAs. The solution was to use CoolBook to avoid overheating.

This isn't a laptop, it's an iMac.

though it might have been thermal paste, not the heat sink, can't quite remember now.

what worked was a cut like in the picture below (found on macrumors) - but without the extra fan installed and since the heat spot is in the area of the hdd - i replaced the 3.5 hdd with a 2.5hdd - the 2.5 fits diagonal in the left corner in the hdd compartment - directly beside the fan - and the heat spot is no longer on the hdd 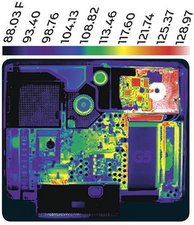 I was having the same issue for a while with my old iMac (17" G5, no iSight). Mine was part of a batch that had an extended warranty to cover getting the logic board replaced, but even after getting that fixed, it still tended to overheat and shut down. I managed to fix it myself, but the solution isn't pretty, and is not for the faint of heart.

First off, I would suggest opening it up and blasting out all the dust that has been building up in there over the years, especially if it has never been cleaned before. Cans of compressed air work wonders, especially on tightly packed systems like iMacs and laptops. Make sure you blast out the CPU heat sink, easy enough from the bottom of the system.

If it keeps overheating after cleaning it, and the caps seem to be in good shape, you're welcome to try my solution if you aren't afraid to get your hands a little dirty...

I went out and picked up two 120mm(iirc) computer fans, cut two holes in the back panel of the iMac case directly on top of the cpu heat sink, and hooked up the fans so that the bottom one pushes air into the case, and the top one pulls air out. I tapped into the existing fan lines to get power, and used the connectors the fans came with so I can easily attach and detach the fans when opening the case. Cutting through the back of the iMac was a bit of a hack job, and as I said before, it isn't pretty to look at and it makes more noise than it used to, but I haven't had a single crash since doing it about 3 years ago. The system still gets used on a daily basis.

I snapped pictures of the process on my phone as I went, and would be willing to dig them up and post them if anyone is interested in giving it a shot and wants a bit more detail on how exactly I did it.

Since you haven't ever opened it, your best bet right now would be to do so, and clean out any gunk/dust/debris out of the cooling system, and heatsink. Then, you may want to replace the thermal paste under the heatsink. Once you're done that, then you can try it out again. If it still doesn't work, then you should look into swapping the hard drive, or replacing the capacitors if they are bulging, or leaking.

one day i opened my cpu and removed the thermal compound paste between the fan and processor, thats why my cpu heats up and automatically shuts down

I think repalcing the heatsink could may solve the problem,but I don't know how to do it.