Black and silver single cup coffee maker with water reservoir on the left hand side. K40/K45. 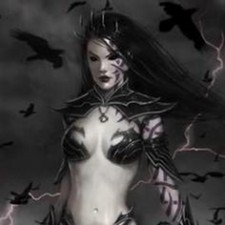 This morning, my Keurig Elite B40 wouldn't brew. I put in a K-cup, and hit the brew button, but no water came out. So, I proceeded to follow some tips I found online for unclogging the needles and checking the tubes. I had to undo the two screws underneath the top housing, so that I could pull it up and check the tubes. I saw nothing wrong with the tubes, so I replaced the screws without doing anything inside the housing.

Now, the top won't close. When I look inside to see what's blocking it, I see a metal tongue back behind the K-cup holder and a bar that looks like it's supposed to slide over the tongue and into a groove. However, the tongue is completely rigid and locked in place, such that the bar would have no hope of sliding back into the groove. I'm assuming the tongue is supposed to have a little give so that the bar can slide over it into the the groove, but since it's rigid, it's impossible to force the handle closed against that pressure.

I didn't mess with anything in this part of the machine - my fingers wouldn't even fit back there. Did I inadvertently mess something up when I slid the top of the housing off to look at the tubes? Help!

I added pictures of the metal tongue and the bar I'm talking about, as well as a photo showing how the Keurig won't close. The photo shows as far down as the handle will go in its current state. 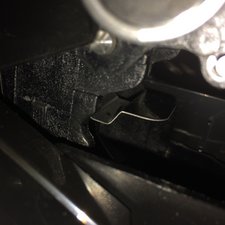 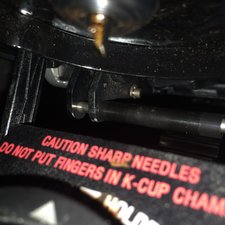 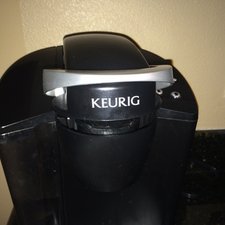 schmick, here are my pictures, they look pretty much the same. I guess I will have to tear mine apart and check it out. This is not an answer but the only way to post images. 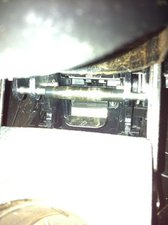 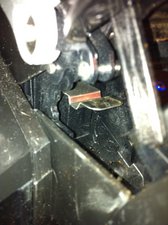 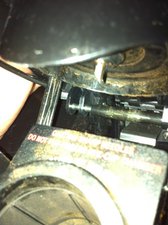 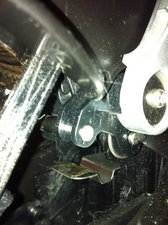 @oldturkey03 Don't tear yours apart on account of me. I don't want your Keurig broken too!

I'll get to it right after work. No big deal as long as the wife won't find out:-))

I believe my problem is similar however I did not remove any screws or do anything to it. Suddenly, you have to hold the lid down with a finger or two to keep it low enough to continue to brew. I guess I will be taking it apart. I was hoping my issue was not unique.

We had the same issue. I removed the upper cover, two screws, to find a rouge piece of plastic had kept the mechanism from closing. Couldn't find where it came from. Doesn't seem to prevent it from working. Opens and closes like new.

We had the same issue this morning. We turned it up side down to remove the water in preparation for removing the screws, and the cover went down itself. Give this a try before taking it apart.

I have the same issue after taking apart my Keurig for a thorough cleaning. When I line up the screws for the top cover out won't close. If I shift the cover slightly forward so the screws don't line up, it closes just fine just as it does without the cover on. Any thoughts?

Our lid Quit closing this morning, I found a small piece broke off and I still can"t see where it came from.

I think it was keeping the lid from opening too far. If I pull down slightly on the part inside the lid I can close the lid I'm going to see if my lid has the two plastic sliding pieces on them and snap them off like mj18oneill said they did.

I have the 2.0 with the same issue. Guess I will be shopping for a new coffee maker. But will turn this in to consumer report. Might need to be a recall.

Unscrew the two screws ( where it says hot liquids), pull back the handle till it closes. Screw in the screws.

Hi to add to Kathryn's post, after you have unscrewed the two screws you will be better able to see the sharp metal K-cup puncture tip. The tip more than likely is jammed into the plastic K-cup holder that is removable. Get something strong like the end of a utensil or a screw driver and gently, but forcibly, pry the puncture tip over the top of the K-cup holder. Once you've done so, then put the screws back into place and you're good to go. :)

Hi my name is Tina and I have figured it out. OK after the top of your kuerig is off . Look under the top there are 2 long plastic pieces that have a lip on it. Now look down at the inside of the kuerig and you will see 2 holes line up the long plastic piece with the holes . And when they are in push forward. That locks the top in. Now your sews go in with no problem . You now will have no problem closing it. Hope this helped have a great day

You are the best. Thank you.

I just took a screw driver and snapped off the 2 plastic sliding pieces that have the little arrows on them. There is one on each side. They slide into place when opening and closing the lid. My machine was stuck half way opened and wouldn't shut or move at all. Problem solved. I roughed up the machine, needed coffee! Coffee drinkers don't play!!!

That is exactly my problem. My one plastic sliding piece came off at the top and I cannot see enough to put it back in place. I'm not sure where it goes. How did you get yours back on? Do I need to unscrew it for that?

I had all the same problems I took it apart to really clean it and when I put back the 2 screws to hold the top handle down.... no go so I just put the handle back on with no screws and jiggled it a lot and the doles will eventually line up. Took my about an hour just fiddling . I put on the handle till it fit then turned unit upside down making sure the lid was closed then put the screws back it . It works!

@librarylady I have the same issue - posted below. Called Keurig - we will see if that helps.

I simply turned the Keurig upsidedown and now it works as new.

This worked for me too! See a detailed approach below.

without putting those 2 hooks in place but it won't work right...and you

Keurig Rivo is recently discontinued not because the machine is bad and unrepairable but because Keurig doesn't do service. They did send the new machine as a replacement for repairable one and of course they were losing money.

It happened to me a year ago and now when the same thing happen again, Keurig offer "big" discount if I buy another machine instaed

The Rivo pods wasn't punctured fully, the handle didn't close and the water was pouring out in the pod bean instead into cup.

Any help will be appreciated.

I had the same issue without having touched the unit. Somewhere a great comment said they had turned the machine upside down to see how to take it apart and when they turned it back the flip top worked once again! Well this worked for me! I also saw where this helped to align the screws holes too - although I never took any screws out from under the "lid" or anywhere. Here is what I did:

3) I cycled the flip lid back and forth and could hear and feel some rough spots but cycled it 3 or 4 times making sure I went full open then full closed. I could hear that something "clicked";

4) I did not have to push especially hard but after I could tell things had at least been convinced to move and it would close fully (e.g., brew mode) unlike when I started.

When I turned it over it was working again. No more having to hold my finger on the lid to to brew. I hope this works so easily for you!

I have this same issue as some here. Cleaning, and the bracket holding the Pod carrier popped out, and after 3 hours of trying to figure it out - can’t find where it goes back together. You can see the bracket in the picture, and I see in other pictures where it should go. 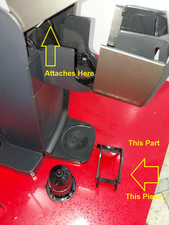