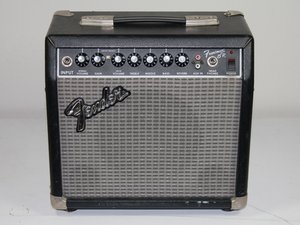 changing to a premium speakers

was wonder how high of a wattage speaker the frontman can support the spec on the amps says 38 quess that's peak output? it's a 8 ohm speaker

For Chits & Grins, I Hooked Up My Fender Frontman 15g To My Fender Twin's 2 Speakers. The Little Bastered Sounded Quite Good!

The only thing to worry about is if the amp will kill the speaker, no worries of speaker killing amp in this case. You can run anything 8 ohms that is rated 15W or higher. Given that guitarists like to torture speakers, I might look for a 25-35W speaker just to make it more bomb-proof. If you are buying a speaker for it, there's not much point in going higher than 50W unless you plan on reusing it in some other (higher power) amp later on. The much higher power speakers generally won't be as efficient at lower power levels.